Far-right groups like those that took part in the Capitol riots are an increasing and serious threat across the US, experts say.

Since Joe Biden’s victory in the presidential election in November, the involvement of armed groups in demonstrations has increased significantly, according to a group that tracks political violence.

The FBI has warned of armed protests in all 50 states ahead of Mr Biden’s inauguration on 20 January.

Demonstrations are more likely to turn violent if militia members are present, the ACLED says.

And these groups have not just started attending more protests – they are also ramping up training and recruitment events.

How many groups are there?

There are dozens of militias across the US with varying ideologies, but generally they are anti-government. While they don’t necessarily advocate violence, often they are armed and some have engaged in violent demonstrations.

Many say they are acting in self-defence over fears of what they believe to be increasing federal government intrusion, with gun control a particular concern. 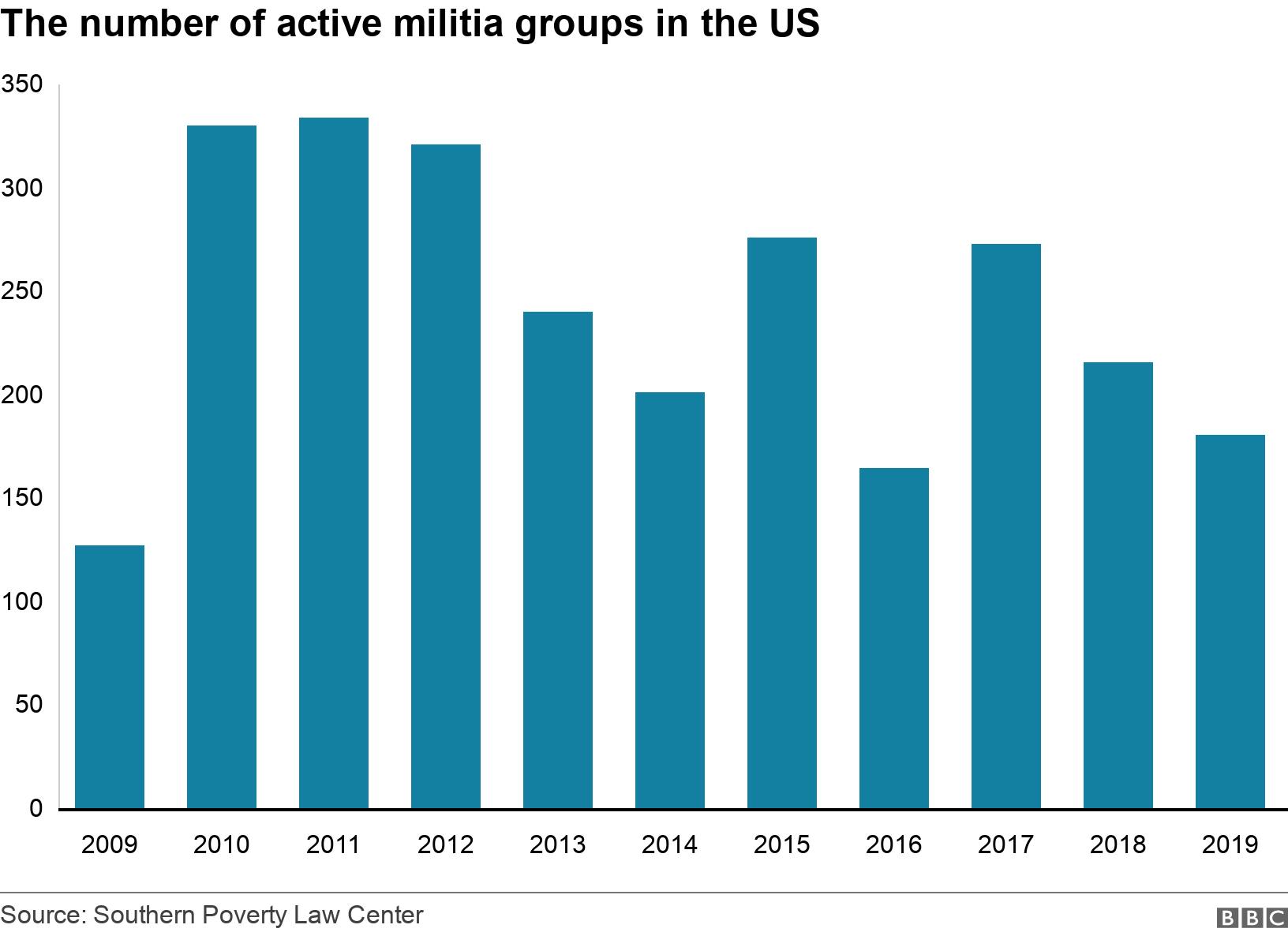 Some states require militias to be authorised by the state government, but the second amendment of the US constitution limits the extent to which controls can be imposed on their activities.

The number of militia groups declined in the US between 2017 and 2019, which militia researcher Amy Cooter says is a common pattern under Republican presidents.

Despite typically being anti-government, these groups have increasingly gravitated towards President Trump.

“Most of these groups see Mr Trump as the closest person to their ideal president that we have ever had,” says Ms Cooter.

Militia activity is widespread across most of the US.

And experts believe the risk of violence will continue to be high, even after Mr Biden’s inauguration.

Who are some of the groups?

Two of the most high-profile US militia groups are the Oath Keepers and the Three Percenters.

Both were founded after Barack Obama was elected president, arising out of belief that the federal government was “working to destroy the liberties of Americans”, according to anti-extremism organisation Southern Poverty Law Center (SPLC).

The Oath Keepers get their name from their members pledging an oath to defend the US constitution. The Anti-Defamation League (ADL) estimates membership at between 1,000 and 3,000, but with influence stretching well beyond this.

The Three Percenters take their name from an inaccurate claim that only 3% of Americans fought against the British in the War of Independence.

More recently, the Proud Boys and the Boogaloo Bois have come to prominence, mostly for being involved in street violence.

The Boogaloo Bois are a loosely organised group whose members often express a desire for an armed overthrow of the government, while the Proud Boys, founded in 2016, are anti-immigrant and all male.

Members of all these groups were spotted at the storming of the Capitol building on 6 January.

The presence of retired military personnel at the Capitol has raised alarm about their involvement in militia groups.

Investigators are looking into the use by some of those involved of tactics which are taught to military and law enforcement officials, like hand signals to gather and direct groups of people.

The Associated Press reported that at least 22 current or former members of the US military or law enforcement have been identified as being at or near the Capitol riots, with more under investigation.

Experts have long highlighted the issue of extremism in the military, including to the US House Armed Services Committee in February 2020.

“There are military veterans who struggle to find their place in society after their time serving,” says Freddy Cruz, a research analyst at the SPLC.

“Anti-government extremist groups try to capitalise on this feeling of instability by selling an image of structure, stability and camaraderie, traits commonly found in military environments,” he adds.

It’s not uncommon to see militia recruitment notices indicating a preference for military or police experience.

“It’s exceptionally difficult to get an accurate number of how many militia members are veterans, given the fact that militia ‘membership’ is often quite fluid,” says Hampton Stall, a senior researcher and militia expert at ACLED.

“A new recruit with military experience is often given a status above an older member of the militia without the experience.”

Stewart Rhodes, the founder of the Oath Keepers, is a former army soldier, and security analysts say the group has had some success in recruiting veterans.

The number of active duty police and military personnel who have admitted to being Oath Keepers is quite small, the ADL says.

“The Oath Keepers have had more success in recruiting former military personnel, a much larger manpower pool to draw upon,” according to the ADL.

In the latest annual assessment by the US Department of Homeland Security, it warned that violent white supremacy was the “most persistent and lethal threat in the homeland”.

During the first eight months of 2020, most domestic terror plots and attacks came from the far-right – substantially more than far-left or militant Jihadist groups – according to the Washington-based Center for Strategic and International Studies.

The German medical students who want to learn about abortion