I think that CLF can meet all of its short to medium-term obligations, and that should be our (my) window as an investor.

From the August highs through mid to late September, the share price of Cleveland-Cliffs (CLF) fell a whopping 28.8% to $18.51. Over the same period, or close to it, but from high to low, the stock underperformed, its best in class rival Nucor (NUE) at -27.5%, the Dow Jones US Steel Index at -24.7%, and the broader Materials sector select SPDR ETF (XLB) , at -9.5%. Slower global growth? Sure, the Chinese engine is sputtering, at least partially due to shifting priorities in Beijing. Below prior view domestic economic growth? No doubt about it. That said, demand for materials, ferrous and nonferrous metals alike only finds support should Congress get squared away and pass legislation around a larger spending package that hopefully includes a significant infrastructure build/rebuild.

This (Monday) morning, Cleveland-Cliffs has apparently agreed to acquire Ferrous Processing and Trading, a large processor and distributor of ferrous scrap metal, primarily operating in Michigan and Ohio. The business processes about 3 million tons of scrap per year, approximately half of which is prime grade, and has generated roughly $100 million in EBITDA over the 12 months ended August 31st. The deal has an enterprise value close to $775 million. CLF CEO Lourenco Goncalves said, “With all the new flat-rolled EAF capacity coming online in our market over the next four years, prime scrap will only become more and more scarce.”

Readers may have noticed iron ore prices up 10% in Asian trading. Readers may have noticed recent rebar price moves in China. Suddenly reports of rising demand for steel, at least in certain parts of China, make headlines. October up from September. November supposedly up from October. No, we don’t know. Especially with the potential for a bursting of the Chinese real estate bubble overhanging financial markets every other day it seems. Fact is, well no… not fact. The idea is that the entire group may have been oversold.

Cleveland-Cliffs is expected to report the firm’s third quarter financial performance late next week. A consensus of the five analysts I see covering this name is for EPS of $2.23, up from a loss of $0.03 per share a year ago, on revenue of $5.69 billion. This would be good enough for year over year revenue growth of 245%. Think it’s the pandemic effect? Okay, let’s use Q3 2019, now revenue growth is 925%. No joke.

If CLF is growing and has real potential to maybe accelerate that growth, why do the shares trade at 4 times forward looking earnings? Could it be the, as of the release of the Q2 numbers three months ago, the dwindling net cash position, the enormous debt-load, the negative free cash flow? Perhaps. Current assets are still twice current liabilities. That said, inventories were about 1/3 of current assets and almost 1/4 of total assets. No, I don’t think we should figure out the firm’s quick ratio.

In fact, not only at that time did long-term debt make up about 40% of total liabilities (ex-equity), pensions and other post retirement benefits make up more than 25%. This firm is saddled with obligations that it will probably be wearing for quite some time.

What Do I Think?

I think that CLF can meet all of its short to medium-term obligations, and that should be our (my) window as an investor. Let’s see what’s up with the chart. 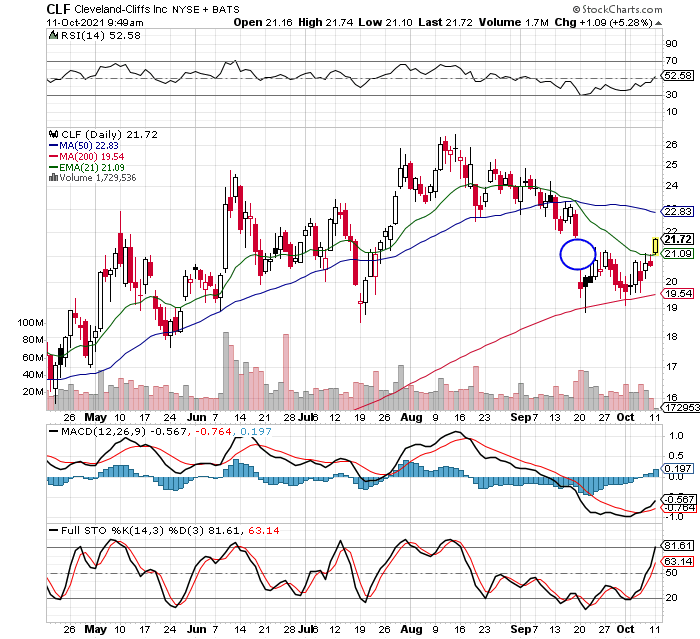 Readers will note that CLF has retaken the 2Q day EMA on Monday morning, after riding support at the 200 day SMA since that mid-September bottom. The Full Stochastics Oscillator thinks that maybe CLF has already become technically overbought, but both the Relative Strength Indicator and daily MACD have openly scorned the FSO for even having that very thought.

I think the shares go for the 50 day SMA ($22.83) by earnings in a week and a half, and depending on how optimistic Mr. Goncalves is that day, the shares either retry the 21 day EMA or move toward a retest of the August highs, which in my opinion is a profit worth taking if it does.

Worst case: Shares are put to the trader at $20 in two weeks with CLF trading below that level. Trader would then be long 300 shares at a net basis of $20.26.