The $5.8 billion Columbia Large Cap Growth Fund (GAEGX) is a best ideas portfolio which, on the strength of its stock picks, has earned recognition as one of the best mutual funds.

“We try to be factor-neutral,” said co-portfolio manager Tiffany Wade, referring to traits like growth and value orientation, stock size and yield. “And we try to be sector neutral. We aim for a balanced approach, not making big macro bets.”

The managers hope that taking an evenhanded approach — relying on individual stock picks rather than big macro bets — will lead to long-term success. “We think our balanced approach allows us to outperform through market cycles, regardless of what’s in favor in any one part of the cycle,” Wade said.

Of course, fishing in the right pond helps as well. The fund held 56 stocks as of July 31. Its top 10 picks alone featured four of the super-popular FAANG stocks, including Facebook (FB), Apple (AAPL), Amazon.com (AMZN) and Google-parent Alphabet (GOOGL).

Best Mutual Funds: What Makes A Stock A Best Idea

In April, the fund began to add to a stake in Match Group (MTCH), which runs its namesake online dating site and owns several others. “They had been impacted by the pandemic,” Wade said. “And we thought they’d benefit from people taking advantage of renewed opportunities to meet other people,” stemming from increasing use of Covid-19 vaccines.

Wade added that she and co-manager Melda Mergen don’t want companies whose only driver is economic recovery. “We want companies that can leverage fundamental benefits for the long-term,” she said.

In March, Mergen and Wade trimmed biotechnology names like disease diagnostics company Exact Sciences (EXAS) and drugmaker Horizon Therapeutics (HZNP). The managers think high valuation stocks, with a lot of earnings potential further out in the future, risk being hurt by rising inflation and interest rates.

Mergen has been a manager of the fund since late 2019. Wade joined her in March, replacing Tchintcia Barros and Peter Santoro. “Philosophically, we think of our portfolio as a collection of our best ideas,” Wade said. “There’s a lot of continuity of philosophy with the prior team. We focus on high-quality companies.”

Alphabet is one of those. And how does Alphabet help Large Cap Growth remain among the best mutual funds? One way it does that is by continuing to shine despite its nearly $2 trillion market capitalization. Earnings per share grew 24%, 29%, 99% and 189% the past four quarters.

In cloud computing, Alphabet has a smaller market share than Microsoft (MSFT) and Amazon.com (AMZN). That gives it room to grow in that field.

Video sharing site YouTube is still ramping up. “YouTube’s in the early innings of growing its advertising,” Wade said. “It could become a big contributor. It’s been growing faster than Alphabet’s core advertising business.” Earnings should grow as advertising scales up, Wade says.

Nvidia makes fast computing chips that are needed for applications ranging from autonomous cars to data centers and artificial intelligence (AI). “One part of Nvidia’s story is the growing need for semiconductors in different markets,” Wade said. “As a chipmaker on the leading edge, Nvidia is most likely to benefit from that spread.”

That benefit will also help Large Cap Growth in its fight to retain its spot among the best mutual funds.

How ServiceNow Helps Make This One Of The Best Mutual Funds

ServiceNow (NOW) is a dominant software-as-a-service (SaaS) player. This workflow management software maker started out by supporting customers’ IT departments. They’ve expanded into support for other departments, such as human resources and facilities management.

The need to integrate platforms accelerates as workflow management increasingly gets automated, Wade says. ServiceNow is bound to benefit from that trend, she says.

In turn, that should boost Large Cap Growth’s prospects for holding onto its perch among the best mutual funds.

Like Microsoft and Nvidia, ServiceNow is a recent member of both the IBD Leaderboard and the IBD 50.

By The Numbers: One Of The Best Mutual Funds

Large Cap Growth became an IBD Best Mutual Funds Awards winner by topping the S&P 500 in 2020 and in the three, five and 10 years ended Dec. 31. 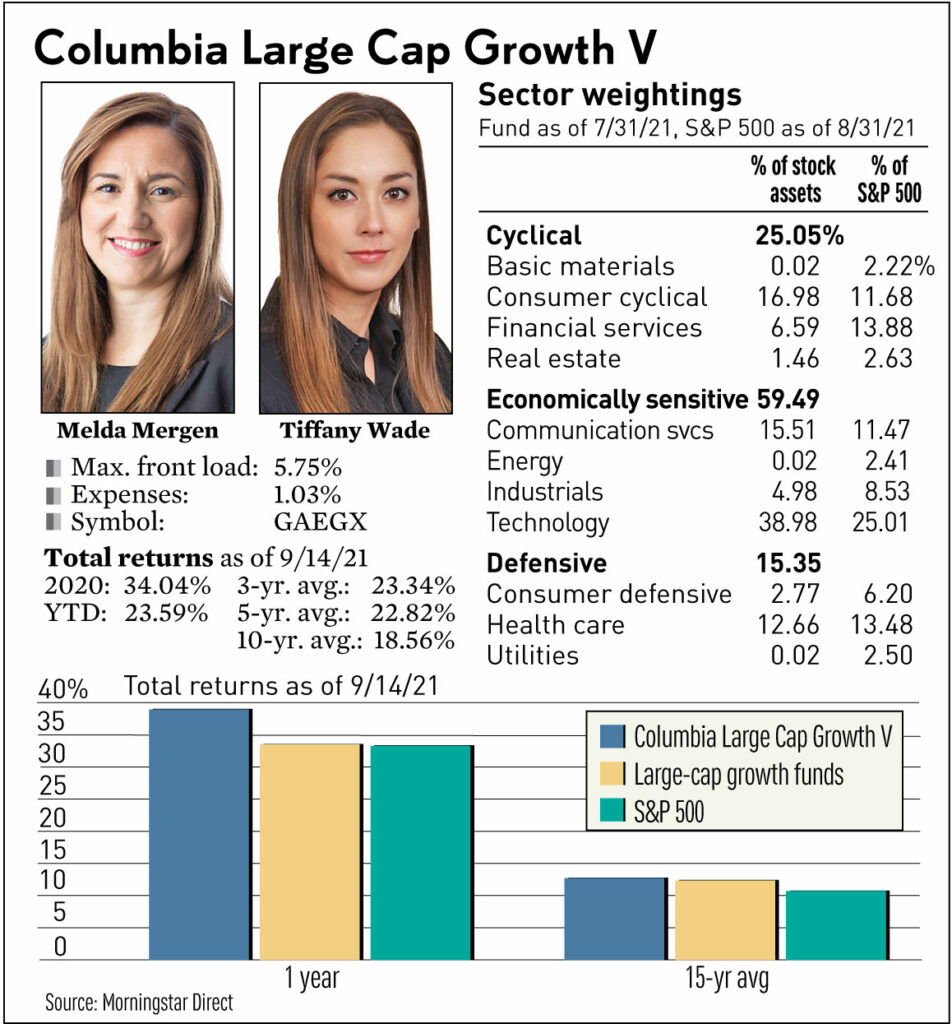