Ethiopia has issued arrest warrants for 76 army officers accused of being linked to the Tigray People’s Liberation Front (TPLF).

Forces loyal to that party are fighting the government in the restive Tigray region.

Ethiopia’s prime minister has said that his army is advancing on its capital, Mekelle.

Hundreds have reportedly died and tens of thousands have fled the area after two weeks of clashes.

Verifying information from Tigray is hard because of a blackout on most communications.

The conflict is rooted in long-standing tension between powerful regional party the TPLF and Ethiopia’s central government.

When Prime Minister Abiy Ahmed postponed a national election because of coronavirus in June, tension escalated between the two groups. The TPLF sees the central government as illegitimate, arguing Mr Abiy no longer has a mandate to lead the country.

The government accused the TPLF of attacking a military base to steal weapons, which the TPLF denied. In response, Mr Abiy ordered a military offensive, accusing the TPLF of treason.

On Wednesday federal police announced arrest warrants for 76 army officers, some of whom are reportedly retired. They are accused of conspiring with the TPLF and “committing treason”, according to AFP news agency.

Speaking to the BBC, Billene Seyoum – a spokeswoman for Prime Minister Abiy Ahmed – denied reports that Tigrayans elsewhere in the country were being arrested on the basis of their ethnicity. But she admitted many had been detained for membership of what she called criminal networks.

The news came after government forces seized the towns of Shire and Axum after a three-day deadline given by Prime Minister Abiy to Tigray’s forces to surrender expired on Tuesday. 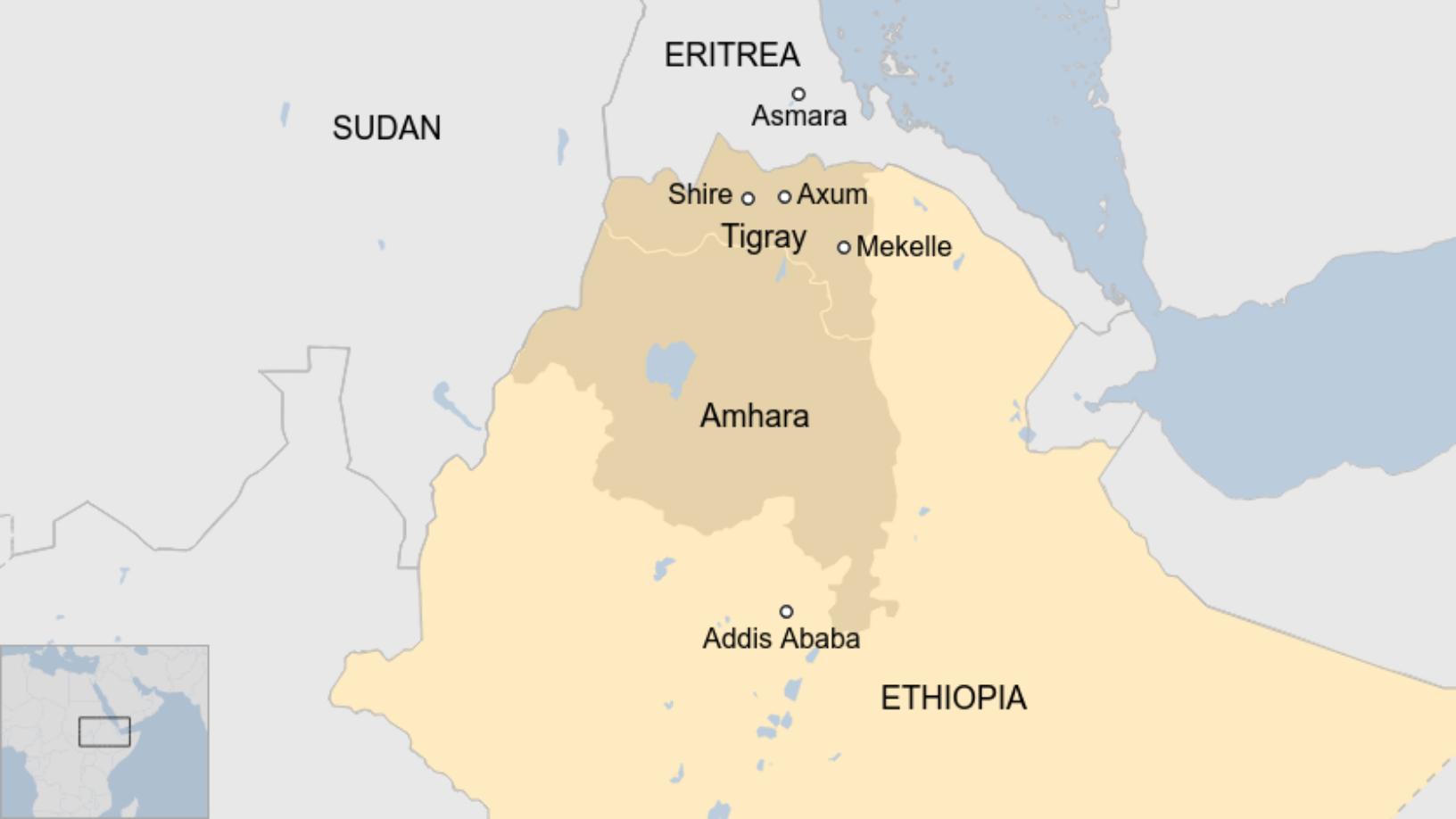 TPLF leader Debretsion Gebremichael, who was born in Shire, confirmed to a local TV station that his soldiers had lost control of the towns in the south and west of Tigray. However he called their victory temporary, and vowed to defeat Mr Abiy’s forces.

Sudan says some 36,000 people have fled over the border from Tigray amid the ongoing fighting. The UN has warned of a “full-scale humanitarian crisis”.

“There may be massive displacement inside Tigray and that is of course a concern and we try to prepare the best way possible,” Jens Laerke, spokesman of the UN Office for the Coordination of Humanitarian Affairs (OCHA), said.

The UN fears the numbers fleeing Ethiopia may be just a fraction of those forced from their homes by the fighting, but for the moment aid agencies have no access to the Tigray region.

Regional powers Kenya and Uganda have called for negotiations to find a peaceful resolution to the conflict. The Ethiopian government has, however, ruled out talks with the TPLF.

1. The Kingdom of Aksum was centred in the region. Described as one of the greatest civilisations of the ancient world, it was once the most powerful state between the Roman and Persian empires.

2. The ruins of the city of Aksum are a UN World Heritage Site. The site, dating from between the 1st and 13th Century AD, features obelisks, castles, royal tombs and a church which is believed by some to house the Ark of the Covenant.

3. Most people in Tigray are Ethiopian Orthodox Christians. The region’s Christian roots stretch back 1,600 years.

4. The region’s main language is Tigrinya, a Semitic dialect with at least seven million speakers worldwide.

5. Sesame is a major cash crop, exported to the US, China and other countries.

China clamps down on over-eating influencers

Ethiopia’s Tigray crisis: ‘How we survived when Mekelle was shelled’