After being ensconced in power in Ethiopia’s northern Tigray region for nearly three decades, the Tigray People’s Liberation Front (TPLF) could be preparing to return to the mountains to launch a guerrilla war against the federal government.

But the Ethiopian military believes that it can prevent this from happening through the offensive it launched on 4 November to oust the TPLF and arrest more than 70 of its leaders and military officers.

They include veterans of the 17-year guerrilla war that led to the TPLF seizing power in the federal capital, Addis Ababa, in 1991 and who then controlled the country’s military and intelligence services until Prime Minister Abiy Ahmed purged them when he took office in 2018. He accused them of being repressive and corrupt – charges they deny.

Having retreated to their strongholds in Tigray while Mr Abiy established his control over the rest of Ethiopia, earlier this month they seized control of a key federal military base – which is part of the Northern Command – located near Tigray’s capital, Mekelle, apparently without much resistance.

The International Crisis Group (ICG), a non-governmental organisation which focuses on conflict-prevention, described it as the federal military’s largest regional military command.

The TPLF seized an array of weapons, including rockets and missiles, though the Ethiopian military still has considerable air power, including fighter jets and helicopter gunships.

Their operation came after Mr Abiy’s government decided to redirect funding away from the Tigray leadership, accusing them of holding an “illegal” election for the regional legislature in September, rather than abiding by a federal decision to postpone all polls because of coronavirus. 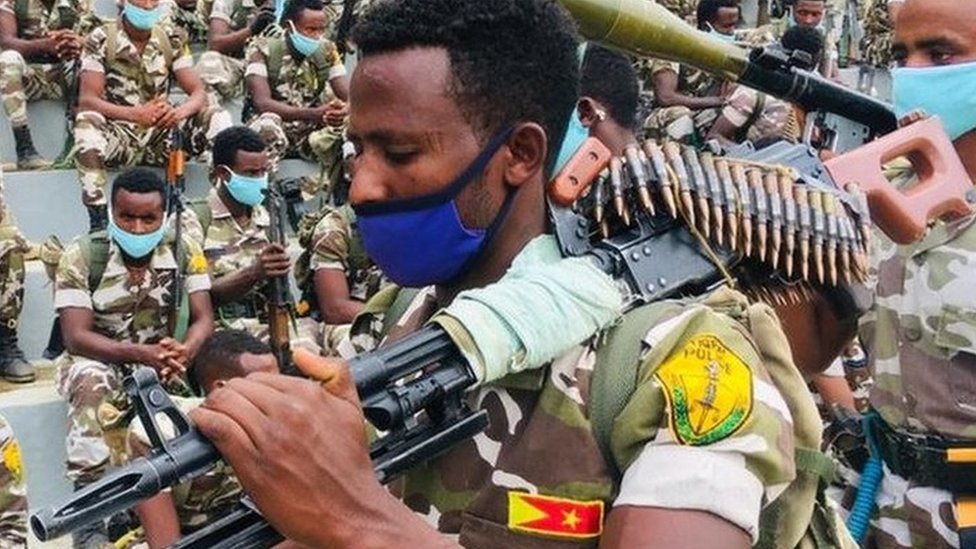 Because of the changed political dynamics over the last two years, there has been significant recruitment and training in Tigray”

TPLF officials say they took the parts of the Northern Command because they believed that federal intervention was imminent. Mr Abiy responded by accusing the TPLF of crossing the “final red line”, and ordered air strikes and the deployment of troops to Tigray.

Twenty-two days into the conflict, Mr Abiy says the army is now launching the “final phase” of its operation in Tigray to take control of Mekelle, which will be over in the “coming days”.

But TPLF leader Debretsion Gebremichael has been defiant, telling AFP earlier in the week: “We are people of principle and ready to die in defence of our right to administer our region.”

Which side has more fighters?

ICG Ethiopia analyst William Davison says the TPLF may be able to call on more than 200,000 fighters – from militias in villages to special forces in the regional government.

“Because of the changed political dynamics over the last two years, there has been significant recruitment and training in Tigray,” he told the BBC.

If these estimates are correct, the Ethiopian military may have fewer soldiers than the TPLF, but it can bolster its numbers by drawing on the special forces of other regional governments – Ethiopian law allows each of them to have these paramilitary units to provide security within their territory.

Significantly, special forces from the Amhara regional government – which has a long-running land dispute with Tigray – helped federal troops secure territory in western Tigray when the conflict started.

“In the west, joint federal and Amhara control may be more established because those forces outnumbered and overpowered local Tigray forces,” said Mr Davison.

“There are also more flat areas in the west, giving a conventional army more advantage,” he said, adding that this was unlike the terrain in the “core” of Tigray, around cities in the east, like Mekelle, where it was rugged and mountainous, making it more conducive for guerrilla warfare.

Arhe Hamednaca, who took part in guerrilla wars against previous Ethiopian governments and went on to become an MP in Sweden, said the offensive in the west had also been aimed at securing the border with Sudan.

He said this was vital – to prevent the TPLF from setting up bases there as it had done when it fought the Marxist regime of Mengistu Haile Mariam 29 years ago.

“The only way for the TPLF to escape and to get fresh supplies is through Sudan,” he said.

Furthermore, there is also no outlet to the Red Sea through Eritrea, as there was in the 1980s, when Eritrea forces were allied with the TPLF against Mengistu.

Prime Minister Abiy has become a staunch ally of Eritrea’s President Isaias Afwerki, who fought a bitter border war with the Ethiopia, when it was under TPLF control.

“Times have changed. The TPLF’s supply routes are not flowing, and to its north is President Isaias Afwerki’s Eritrea, its principle enemy,” BBC Tigrinya editor Samuel Ghebhrehiwet said.

Several sources in Eritrea have told the BBC that Ethiopian troops have been crossing the border to regroup and to treat their wounded in military hospitals – though both governments deny Eritrean involvement in the Tigrayan conflict.

But that doesn’t necessarily mean that federal forces will have the quick victory they hope for.

Mr Arhe notes that there are numerous examples of guerrilla fighters taking on better armed opponents.

“The Americans had all sorts of drones and fighter jets in Afghanistan, but the Taliban survived,” he said.

“The Houthi rebels in Yemen have survived UAE and Saudi weapon superiority.”

Mr Davison said that while federal troops were advancing towards Mekelle, it was unclear how many towns and cities they had actually taken control of along the way and how many they had just passed through.

Who will Tigrayans back?

Either way, many Tigrayan fighters may eventually retreat to villages and surrounding mountains to prepare for a guerrilla war that could receive significant public support, he added.

“Though federal officials claim the opposite, many Tigrayans seem to oppose the intervention because they believe it is to remove a legitimately elected regional government,” Mr Davison said.

Moreover, they generally support the federal system that the TPLF helped introduced after it took power in Addis Ababa in 1991, as the best way to protect their political, linguistic and cultural rights, he added.

In contrast, the TPLF accuses Mr Abiy of trying to establish a more unitary type of government.

The BBC’s Tigrinya editor says that while a surge in Tigrayan nationalism could work in the TPLF’s favour, the possibility that many people may instead back the federal government cannot be ruled out.

“During the armed struggle [against Mengistu], the people of Tigray were fully behind the fighters. But in the nearly three decades that the TPLF has been in power, many Tigrayans objected to the leadership because of systemic corruption and oppression,” Mr Samuel said.

He believes that the outcome of the battle for Mekelle will determine whether or not the TPLF can wage a guerrilla war, but even if the Ethiopian military gains the upper hand, he does not envisage the conflict ending without proper negotiations between the different sides.

Baba Ka Dhaba: The year in the life of a viral Delhi eatery owner