Some Tigrayans in Ethiopia have described to the BBC how they have been harassed, detained or discriminated against since fighting began in their home region on 4 November.

Prime Minister Abiy Ahmed has emphasised that the conflict in the northern Tigray region is against a “criminal clique” within the dominant party there, the Tigray People’s Liberation Front (TPLF), but reports from elsewhere in the country suggest there is an ethnic dimension to the crisis.

Tigrayans make up around 6% of the Ethiopia’s more than 110 million people and many live outside their regional state.

The government has denied that there has been ethnic profiling and said any action carried out against individuals was for justified security reasons.

Some in the security forces have told the BBC that they have been disarmed and ordered to stay at home.

‘Hand over your weapon’

One of those was a female officer who had been working as a policewoman for more than 20 years, but was once a member of the TPLF, which was originally a militia force.

She said that two days after the fighting began, she received a call from a superior who asked her to report to the office the next day.

On her arrival she was “ordered to hand over all government property and my firearm”.

She added that some high-ranking officials, who were also Tigrayan, were given the same strict order. 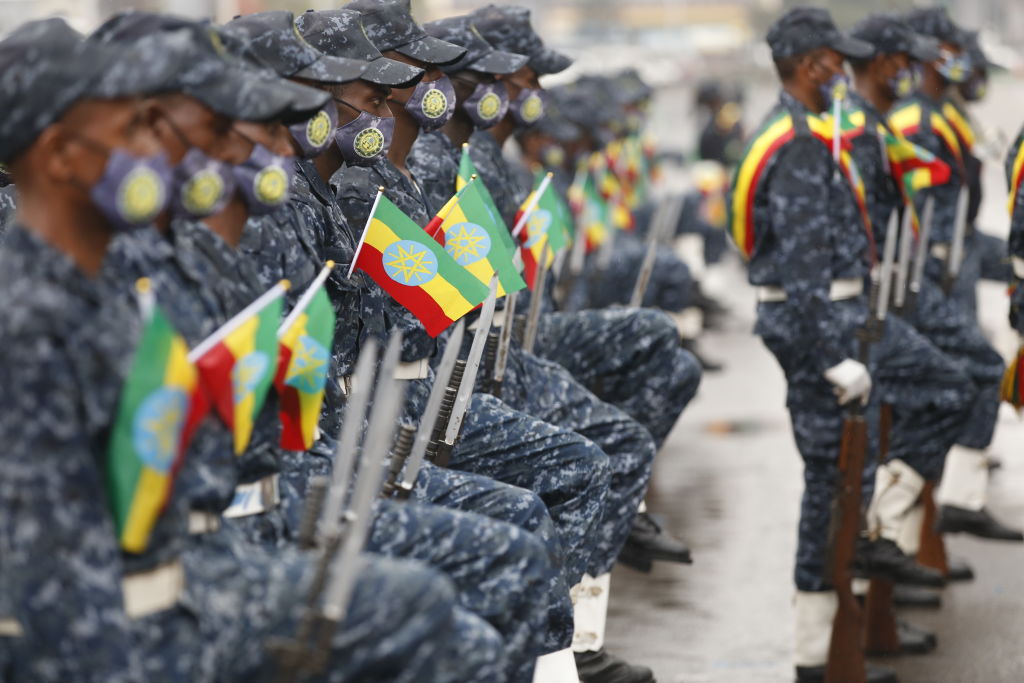 Taking law-enforcement measures based on ethnicity and identity is something that we… would condemn, this is not acceptable

The government has not commented on the allegation that police officers have been disarmed because of their ethnicity.

But speaking about the issue in general, Mamo Mihretu, a senor adviser to the prime minister, told the BBC that “taking law-enforcement measures based on ethnicity and identity is something that we take seriously and would condemn – this is not acceptable”.

However “there is a clear instruction to the security agencies to take their measures based on risk and actionable intelligence”, he said adding that it was aimed at “hardliners – disgruntled and reactionary elements of the TPLF”.

Since coming to power in 2018, the prime minister has tried to emphasise national unity while also respecting the identities and rights of the different groups which govern the country’s 10 ethnically based federal states.

But the fallout from this conflict has exposed the difficulties of maintaining that position.

The BBC has also heard from a federal soldier of 14 years’ experience who alleged he and others were singled out because they were Tigrayan in what he described as “shocking” treatment.

He said he was detained in a warehouse by his fellow soldiers with nearly 90 other Tigrayan members of the armed forces. They had their phones confiscated and were “treated as prisoners of war”, he alleged.

“It was only the Tigrayans who were disarmed and detained together. So, it’s obviously based on our ethnicity,” added the soldier, who wanted to remain anonymous.

When those detained challenged the people who were holding them “they said: ‘The TPLF attacked our [base in the north] and this order to detain you came from the top'”, he told the BBC.

Among those held were veterans of the TPLF’s struggle against Marxist dictator Mengistu Hailemariam, who was toppled in 1991. The TPLF then became the dominant political force in the whole country but say they were sidelined by Mr Abiy when he came to power in 2018

Others were high-ranking military officials, some of whom had spent time in the African Union force in Somalia, he said.

“I had never imagined those people who had relentlessly served the national army and their country would be treated this way.”

He later managed to escape from the warehouse, disguise himself as a civilian and flee to a neighbouring country, from where he spoke to the BBC.

He said that as he was crossing the border, he was careful to hide his Tigrayan accent so as not to arouse suspicion, adding that he fears for the lives of his comrades who he left behind in the warehouse.

Others sources have told the BBC that many Tigrayans, who are either current or former members of the armed forces, have been detained or have had their homes searched, and some put under house arrest.

When asked for comment, Chief-of-Staff Gen Berhanu Jula told the BBC that this was “a political matter” and he was not in a position to respond.

This allegation of ethnic profiling is not limited to members of the military and the police.

A Tigrayan civilian, who asked to remain anonymous fearing for her safety, told the BBC that last week a group of armed people, who appeared to be members of the security forces, came to her home, searched it thoroughly, seized bank statements and took away her father, who makes his living as a driver.

She said he was then held for two days and was accused of having “travelled to Tigray with six million birr ($160,000; £120,000) and returning to Addis Ababa with weapons”.

She disputed this and said that his work driving tourists took him all over the country. The accusation has now been dropped.

The issue has also allegedly affected some state-run organisations such as the national carrier Ethiopian Airlines.

Several Tigrayan employees there have been forced to take leave until further notice or work from home, sources at the airline told the BBC. Ethiopian Airlines did not respond to repeated requests for comment.

The UN’s World Food Programme (WFP) recently said that a police officer asked staff at its branch office in the Amhara region to give details of their employees including birthplaces.

The WFP said the information was not available and then confirmed with the regional police that the request was not part of official policy.

The federal government described reports that this was related to ethnic profiling as “a complete misrepresentation of the event”. It said the police officer was acting on specific intelligence that TPLF “operatives [were] embedded and active within various local and international organisations within the country”.

It added that the police officer had a list of names and went to the WFP office to see if anyone on the list worked there.

It is clear that the security operation does not only concern what is happening in Tigray itself as the federal authorities are worried about TPLF sympathisers elsewhere.

But people who have spoken to the BBC have said that they have been singled out because of their ethnicity rather than anything they may have done.

If the conflict is short-lived then concerns about ethnic tensions may go away but if it proves to be protracted then there are fears that life for Tigrayans outside Tigray may become more difficult.

Despite seeing the TPLF as a blockage in the plan to achieve national unity, the impact of the conflict could prove to be a major challenge to the prime minister’s vision of bringing the country together.

“If there is anything that the government is doing, it’s to create a society that emphasises the ties that bind all of us,” his adviser Mr Mamo told the BBC.

But the conflict in Tigray could threaten that goal.