Two Ethiopian soldiers have given BBC Afaan Oromoo dramatic accounts of a co-ordinated night-time raid on their camps at the start of the conflict in Tigray last month by fighters linked to the now-overthrown regional administration.

The Tigray People’s Liberation Front – which previously controlled the government in the northern region – said it had carried out a pre-emptive strike, when the world’s attention was focused on the US election, as it believed that it was about to be attacked by federal troops.

Prime Minister Abiy Ahmed retaliated by ordering a military operation which culminated with the overthrow of the local government, forcing the TPLF to retreat to mountains to fight what it calls “invaders”.

It has been difficult to get accurate information about the conflict because of a communication blackout in the region.

The accounts of the soldiers highlight ethnic divisions in the Ethiopian military, with some Tigrayan soldiers accused of siding with the TPLF.

I was at a camp near Adigrat city, near the border with Eritrea. At around 23.30 on 3 November, I, and other soldiers, received text messages from our comrades at the base in Agula town – about 30km (18 miles) north-east of the Tigray capital, Mekelle – saying: “We are surrounded. If you can come and rescue us, come.”

Not long thereafter, our camp was also surrounded, with hundreds of TPLF special forces and militias having taken up positions outside. Some of the Tigrayan soldiers – who had left our camp earlier – were with them.

We went to the colonel who held the key to the storeroom where our weapons were kept. We told him to open it.

He refused, saying he did not have orders to do so. He was a Tigrayan, and we suspected he was part of the plan to attack us.

Some soldiers argued with him to open the storeroom; others tried to break open the door. Eventually, we got our weapons. The TPLF forces were already shooting by now.

We took up our positions, inside and outside the camp, using rocks, barrels, walls as shields. It was around 01:00 when the battle started.

We killed more than 100 of them. They killed 32 of us. In my unit, one died and nine were wounded.

Most of our deaths were caused by the Tigrayan soldiers who had defected to the other side.

The battle lasted for about 11 hours until noon when our senior commanders ordered us to stop fighting, return our weapons to the storeroom, and to go back to our rooms. We obeyed.

Shortly thereafter the priests and elders of the town came. They negotiated a surrender. At around 16:00, we were ordered to hand over all our army belongings to the TPLF forces. Again, we obeyed.

Then, we were told to collect our personal belongings and made to climb into lorries. We took our wounded with us. We were forced to leave the dead behind.

‘I gave a false name’

The TPLF forces transported us to one of their bases in the town of Abiy Addi, 150km south-west of Adigrat. 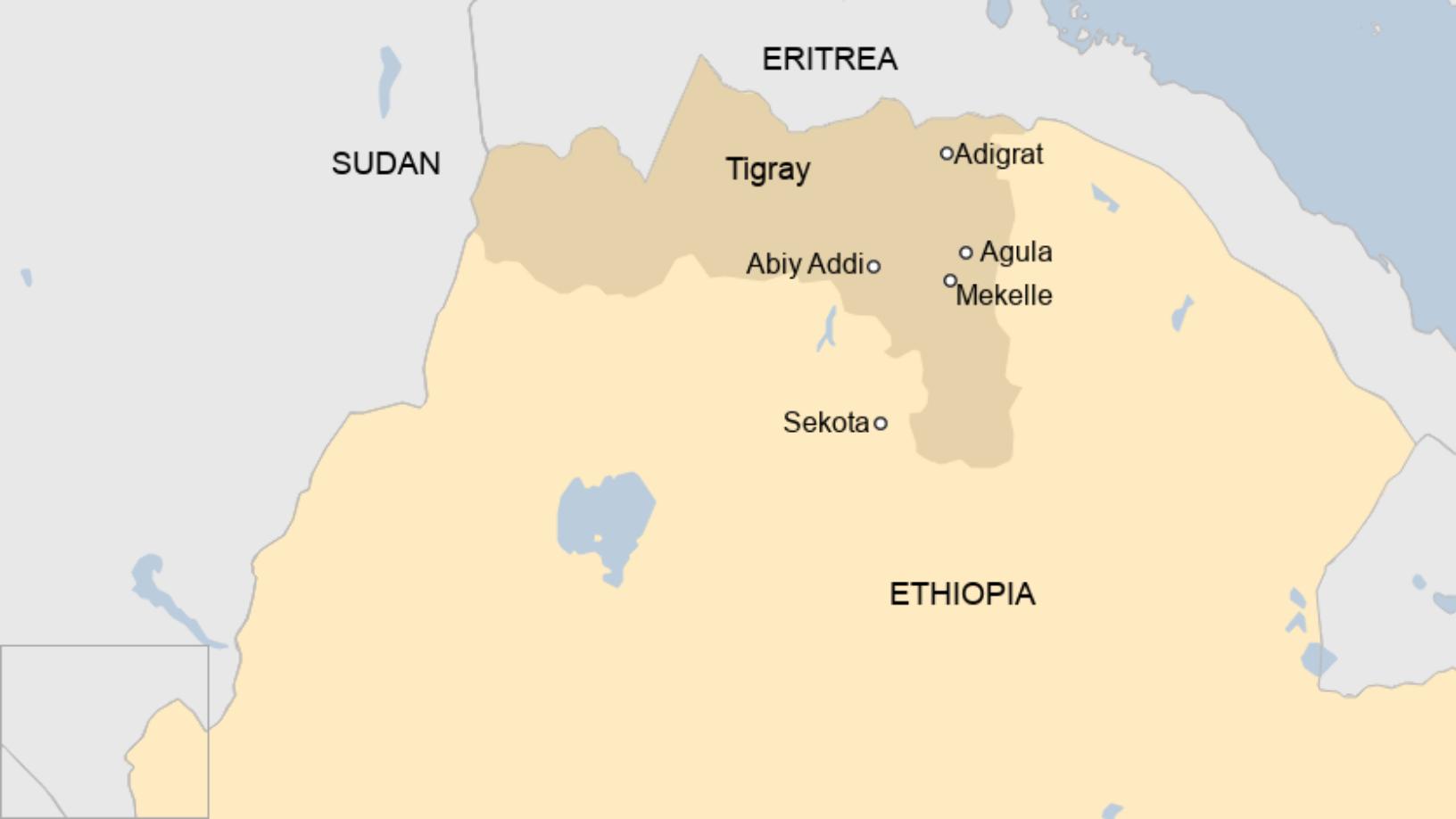 The wounded soldiers got no medical treatment throughout this period.

Each morning there was a roll call. We had to give our names, ethnicity and role in the army. I used to give a false name.

This was like a desert area, and it was very, very hot. We had little water to drink. Every morning, we were given tea, with no sugar, in a plastic water bottle that had been cut in half. Our food for the day were two small loaves of bread.

Soldiers from other bases were also brought to Abiy Addi. They told us they too had been attacked. Some of them surrendered without fighting; others put up more resistance than us, fighting for four days.

Kalashnikovs, heavy weapons and even short-range rockets were used in the battle. Some of our soldiers fled to Eritrea.

After about two weeks, the TPLF forces gave us three options – join them, live in Tigray as civilians or go back to our homes. We took the last option.

But our senior commanders, radio operators, female soldiers and those who could use heavy weaponry were not given the option. They were kept at Abiy Addi, thousands of them.

The rest of us were told to take off our uniforms. We refused, saying they could kill us but we would not do it – that our military code did not allow it; that our uniform was our pride.

In the end there was an agreement. We would take off our uniforms, and they would all be burnt [so they could not be used by others]. The TPLF recorded the burning on camera.

It was at around 15:00 on a Friday that we were all made to climb into lorries. Again, we took our wounded with us, but there were none in my lorry.

There were about 500 of us in each lorry, and I’d say about 9,000 soldiers in all the lorries. We sat in the lorries crammed until we left Abiy Addi at around 23:00.

We travelled for hours on back roads until the TPLF special forces – who were escorting our lorries – dropped us off on the banks of the Tekeze River at the border between Tigray and neighbouring Amhara state.

The lorries came at different times. We all broke into groups and crossed the river in boats. About six hours had passed before my group reached the other side.

We then walked for about 16 hours to reach Sekota town in Amhara.

We are now in a police station compound in the town. We are being well fed and well looked after. The wounded are being treated in hospital, more than three weeks after the attack.

I heard that some of them died on the way, and their bodies were left behind.

I have been in the army for about eight years. I was also in Adigrat, but at another camp. I was the guard on duty on 3 November, watching the camp from 22:00 to midnight. Some of the soldiers were already sleeping.

Right after I finished my shift I heard gunshots. I had no idea what was happening. I went to see.

TPLF special forces and militia had already surrounded our camp, and they entered it. Most of us were unarmed.

They ordered the soldiers, including myself, to surrender. We refused, saying federal troops could not surrender to regional troops. But in the end we agreed on the orders of our seniors, who were Tigrayans.

We were kept in the camp until 6 November. The TPLF forces then transported us in lorries to a small town, Idaga Hamus, which is about 26km from where we were. We were kept there for a week and then taken to Abiy Addi.

There, we found many people loyal to the federal government, from the police, army and air force.

We were divided into groups, and kept in three different places – a military camp, a training school and a compound.

There was no water to shower, little water to drink. It was as though we were left to die in that heat.

We slept in small rooms in very crammed conditions.

Then more than three weeks later, we were given three options – if we were married with children in Tigray, we could live as civilians, or we could join the TPLF or we could leave. Most of us chose the third option.

But radio operators, those who could use heavy weaponry and senior commanders had to stay behind.

I am a radio operator but I lied about my role so I was able to leave.

We were put in about 28 lorries and were driven for hours, through desert areas, until we reached the Tekeze River.

The journey was very difficult. Some soldiers fell off the lorries and broke their legs. Others got sick.

But we are now in Sekota.

Some of the soldiers resent the fact that there was no rescue operation, but they understand that the situation was difficult.

This was an unprecedented attack on the federal army.

Soldiers who were at other bases reported that the TPLF forces stole watches and necklaces from dead soldiers. They even took their uniforms, and left the bodies behind naked.

In the eight years I was in Tigray, I never thought this would happen. Just a week earlier, we were helping farmers to harvest their crops and to fight a locust invasion.

Karl Edwards: The ‘bronzed Aussie’ who knew life was for living