The rebel capture of Tigray’s capital city Mekelle is a significant milestone in the eight-month conflict in northern Ethiopia, which has killed thousands of people and left millions in desperate need of food and other assistance. Will it be a turning point in the war?

The Ethiopian government pulled out its troops after months of fighting, sparking celebrations on the streets.

Prime Minister Abiy Ahmed initially said the withdrawal was a strategic move because the city was no longer “the centre of gravity for conflicts”, but he later confirmed it was to avoid further casualties.

“We’ve seen a very significant shift in the war,” says Will Davison, senior analyst for Ethiopia at the International Crisis Group.

“It signals that either the federal government was unable to hold onto Mekelle, or it realised it is in its best interest to withdraw from Tigray. That was in light of significant battlefield gains” by rebel forces loyal to the Tigray People’s Liberation Front (TPLF).

After withdrawing, the Ethiopian government unilaterally declared a “humanitarian ceasefire” in Tigray, saying a pause in hostilities was needed to allow farming activity to take place and for aid to be delivered.

But since then, TPLF forces have continued fighting, seizing more territory including the town of Shire.

The Tigrayan rebels now appear to have the upper hand in this long-running conflict. How this will play out remains to be seen.

Experts say Ethiopia’s leader will now be focused on what happens in the west of Tigray, and the conflict between Tigray rebels and forces from the neighbouring Amhara state. 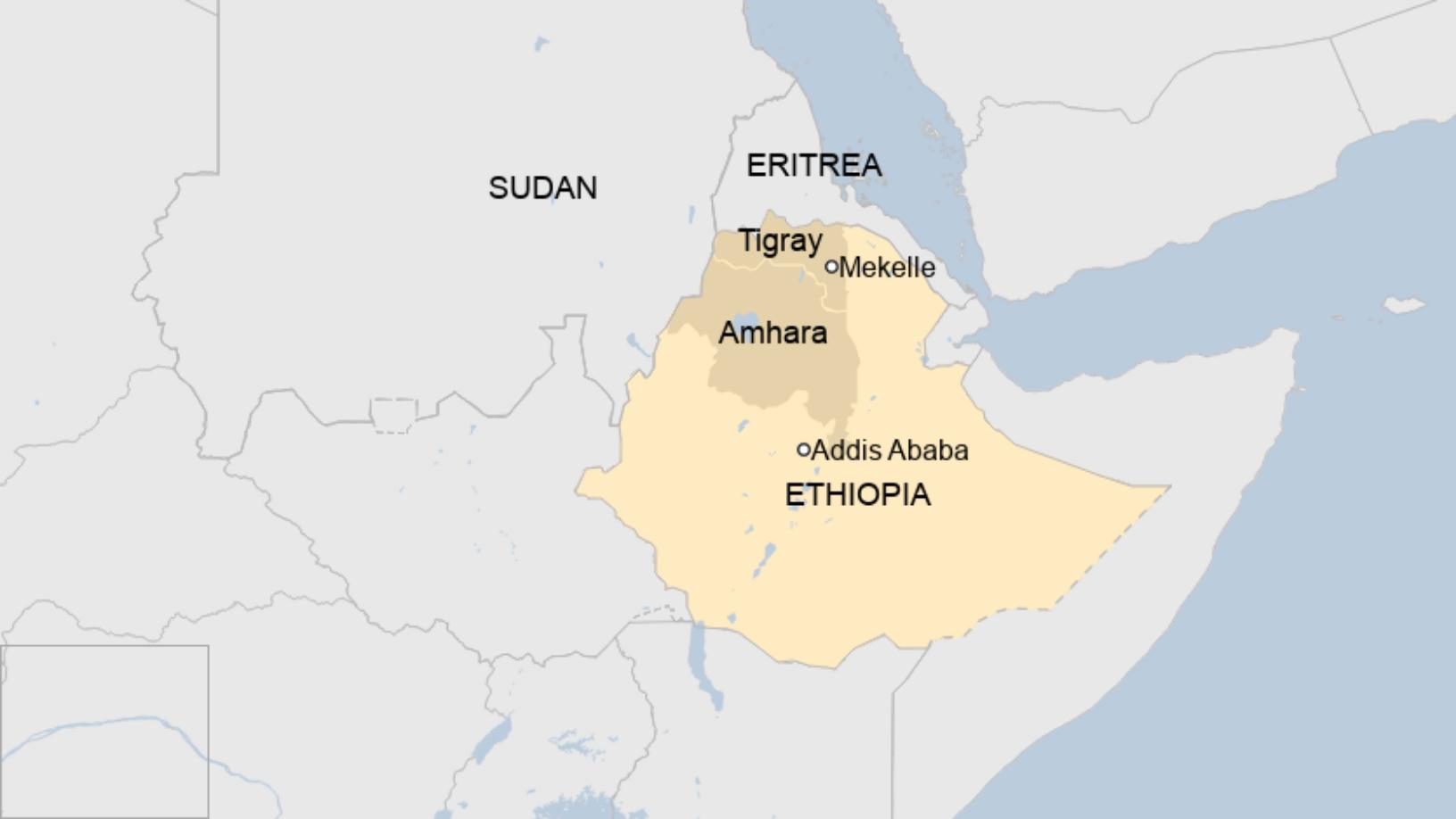 Amhara is home to one of the largest ethnic groups in Ethiopia. The fertile land around the state’s border with Tigray has long been disputed and Amhara regional forces and militias are trying to win back some of the territory which they say is rightfully theirs.

“The Amhara wing of Prosperity Party is one of the two most powerful regional branches of Abiy’s ruling party,” says Iain McDermott, an analyst at the security consultancy Protection Group International.

“So that means potentially tolerating and supporting Amhara efforts to annex areas of the Tigray region which many Amharas argue were part of Amhara region prior to 1991.”

Mr Davison says there is another reason for the federal government to focus on the Amhara region, which shares a border with Sudan along with Tigray.

He says that would prevent the Tigrayans using the area to create an international supply route, if other channels to Tigray are cut off.

What isn’t clear is the extent to which the Ethiopian military has been weakened during the past eight months of fighting.

The rebel group has claimed it recently “neutralised” tens of thousands of Ethiopian soldiers in its June offensive. It hasn’t specified whether that means those soldiers were killed or captured as prisoners of war, but either way, the losses to the Ethiopian National Defence Force appear to be heavy.

Alex de Waal, executive director of the World Peace Foundation of Boston, says the ENDF “was an army of 20 divisions – seven have been completely destroyed, three are in a shambles”.

But other commentators say it’s difficult to be definitive about the scale of the Ethiopian losses.

“It’s one of the million-dollar questions,” says Mr Davison. “We don’t really know but I think it’s a pretty worrying picture for the federal forces. There’s been a significant depletion and also significant loss of morale.

“Compared to Ethiopia’s former status as a much-valued regional peacekeeper, its military is now significantly weaker,” he added.

What is certain is that for Ethiopia, the financial cost of the war has been huge.

Mr Abiy said this week that on top of the cost of the military effort in Tigray, his government had spent more than 100 billion birr (about $2.3bn; £1.7bn) on rehabilitation and food aid, a figure he said was equivalent to around 20% of this year’s national budget.

Mr Abiy’s next steps will be watched closely by the international community, which for months has been raising concerns about the plight of civilians in Tigray.

Since withdrawing from Mekelle, the federal government has been accused of cutting off the electricity supply and phone lines to Tigray, leaving hospitals there relying on generators, according to the International Committee of the Red Cross.

“That does not amount to a humanitarian ceasefire and instead represents a major constraint on the humanitarian operation,” says Mr Davison.

“What looks like an Ethiopian policy to make Tigray further ungovernable now that the dissident leaders are back in charge, will have a further devastating impact on the civilian population.”

Foreign governments including the Biden administration in Washington are putting pressure on Addis Ababa to ensure the security situation in Tigray improves, allowing aid to be delivered to the millions of people desperate for food and other supplies.

If it doesn’t improve, “Ethiopia and Eritrea should anticipate further actions,” said Robert Godec, the US assistant secretary of state for African affairs. “We will not stand by in the face of horrors in Tigray.”

Eritrean forces have been fighting alongside federal Ethiopian soldiers since the beginning of the war. But the conflict has gone on much longer than either country expected.

“A big question remains over whether Eritrea will decide to pull out its troops,” Mr De Waal says.

The protracted conflict has had a damaging effect on ties between the two countries, according to security analyst Mr McDermott. “Relations between Addis and Asmara have become strained,” he says.

Instability across the Horn of Africa is nothing new, but there are fears that a worsening situation in Ethiopia could have knock-on effects across the region.

So far, Prime Minister Abiy remains in control. But if that changes, the consequences could be catastrophic, says Mr Davison.

“Any further fragmentation, let alone state collapse, would obviously be disastrous for the region given Ethiopia’s status in the Horn.

“That does not appear to be imminent, but the growing level of risk has to be taken seriously.”

Khraniteli: The Soviet take on Lord of the Rings