“War makes for bitter men. Heartless and savage men,” Ethiopia’s Prime Minister Abiy Ahmed said when he received the Nobel Peace Prize less than a year ago – only for him to now wage a military operation in his own country.

Over about a three-week period, his troops fought their way through Tigray, right up in the north of Ethiopia, to oust the region’s ruling party, the Tigray People’s Liberation Front (TPLF), accusing it of attacking a federal military base.

A former guerrilla movement which first rose to power in 1991, Tigray was the last political bastion of the TPLF after it lost control of the federal government to Mr Abiy in 2018.

Mr Abiy became prime minister with popular support, introducing sweeping reforms to end the repression and corruption that Ethiopia had seen when the TPLF dominated the national political scene for more than 25 years.

Believing that it was the patriotic duty of all Ethiopians to rally behind their prime minister’s 4 November call to oust the “junta” from its remaining stronghold after its dramatic military manoeuvre, federal officials tolerated little criticism of their “law and enforcement operation”, targeting even the UK-based academic who was among those who nominated Mr Abiy for the Nobel prize.

A senior law lecturer at England’s Keele University, Awol Allo said he learned through reports on Ethiopia’s state broadcaster that police had accused him of “using international media to destroy the country” – a reference to the columns he writes and the interviews he grants to the likes of Al Jazeera and the BBC.

“At this point I am not aware of an arrest warrant, but going back to Ethiopia will carry a significant risk,” Mr Awol told the BBC.

“There is no distinction between Abiy’s regime and the previous regime as far as their treatment of dissent and opposition is concerned. It is classic Ethiopia – where the legal system is used as an instrument to discredit and silence opponents of the regime and individuals who hold critical views.”

The Geneva-based head of the World Health Organization, Dr Tedros Adhanom Ghebreyesus, was not spared either.

Having previously served in the TPLF-led government, he was accused by Mr Abiy’s army chief of trying to procure weapons for the party.

Rejecting the allegation, Dr Tedros said: “My heart breaks for my home, Ethiopia, and I call on all parties to work for peace and to ensure the safety of civilians and access for health and humanitarian assistance.”

Defending the government, Menychle Meseret, an academic at Ethiopia’s University of Gondar, said only those suspected to have direct or indirect links with the TPLF “oligarchy” were targeted.

“Since Mr Abiy became prime minister, 264 websites have been unblocked. So what has happened now is not an overall reflection of the state of democracy in Ethiopia. There was a threat to the country – no country can tolerate that,” he said.

Mr Awol said the issue was not who fired the first shot, but the fact that Mr Abiy had rebuffed calls for mediation, including from the African Union (AU) that is headquartered in his own country.

“What you need is a government that rules with far more patience, tolerance, and gives peace and mediation a chance. Instead, both were preparing for war.

“Abiy removed the TPLF from the cabinet [in 2019]. He then postponed elections. The TPLF then went ahead with an election in Tigray. They said they don’t recognise him [as prime minister]. He said he doesn’t recognise them, and that is what led to the war,” Mr Awol said.

The government says the nationwide elections were postponed because of coronavirus restrictions, although Mr Abiy’s critics accuse him of using it as an excuse to illegally extend his time in power, while neither he nor his new party had faced the electorate.

For former Prime Minister Hailemariam Desalegn, foreign mediation was out of the question as it tended to lead to “peace deals that often crumble as soon as they have been signed”, while “rogue actors are rewarded for instigating violence” rather than facing justice.

But for Mr Abiy’s critics, there is little justice in Ethiopia – only repression.

“Back in July there were about 10,000 people in prison. And the number is probably even higher now because of the war in Tigray,” Mr Awol said.

Expressing a similar view, United States Institute for Peace senior adviser Payton Knopf said: “The political space has closed again. Every prominent opposition figure is in jail, and Lemma Megersa – who was instrumental in Mr Abiy becoming prime minister in 2018 – is under house arrest.”

“He unbanned political parties. He improved the prison system. He allowed people to return from exile. The problem was that some of the politicians began to fuel violence because of their ethnocentric agenda.

“At one rally, a young man was killed and hung on a stick. You can’t have that. In 2018, there were about 1.8 million internally displaced people, the highest in Africa. This was endangering the country,” Mr Menychle said.

He added that at the heart of the myriad conflicts was the “ethnic federalism” that the TPLF had introduced when it took power in 1991 by creating regions along ethnic lines. 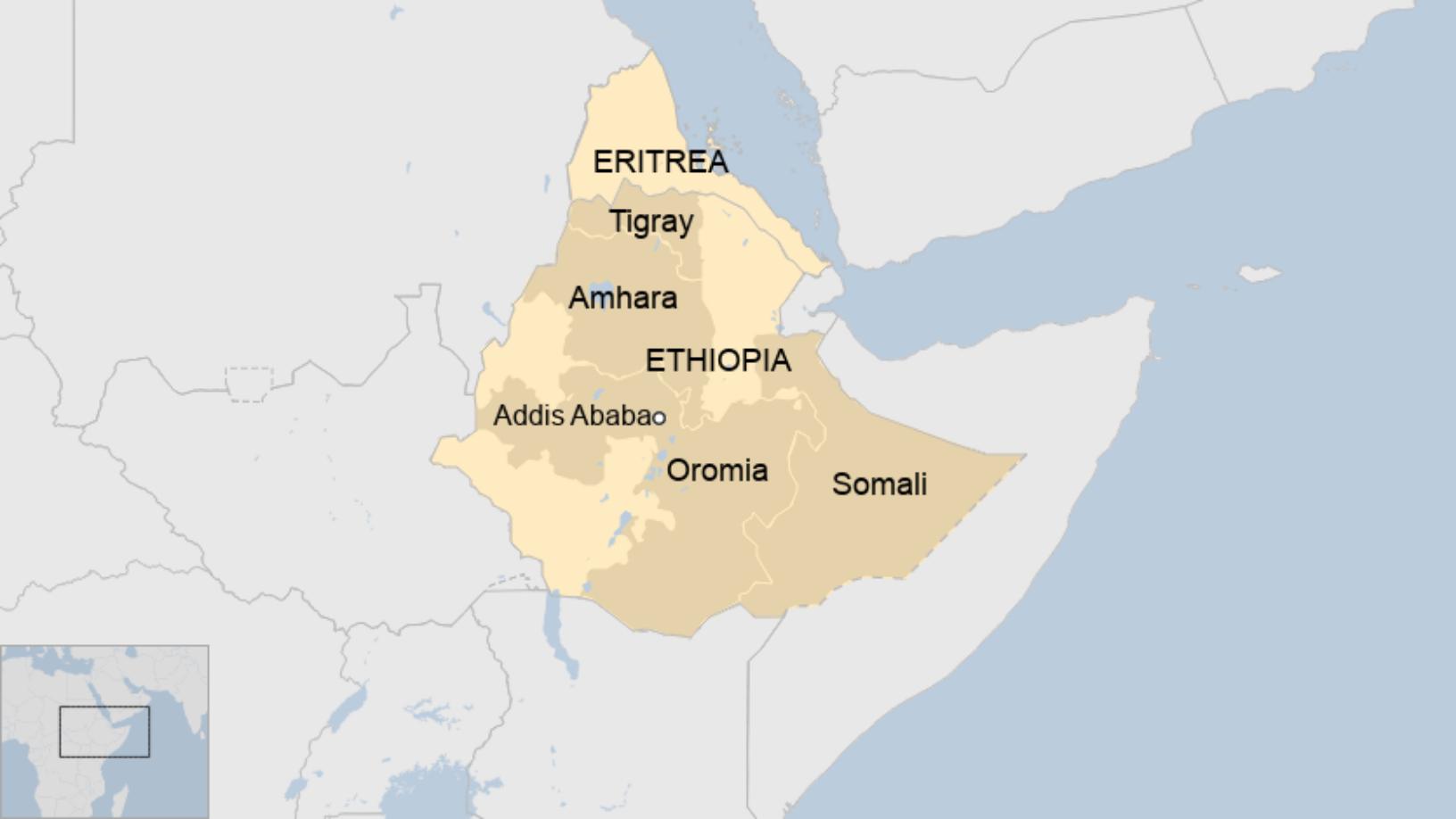 “Ethnic federalism has been the source of our misery. It has made ethnic groups believe that they have their own areas, and if you come from a different ethnic group you can’t live there. You are chased out, burnt, killed,” Mr Menychle said.

For Mr Abiy’s critics, the abolition of ethnic federalism would herald a return to the time of “imperial rule”, when emperors – from Menelik II to Haile Selaisse – forced other communities to “assimilate” into their Amhara culture, though many Amharas deny they did this.

“Mr Abiy’s vision looks more and more like that of Ethiopia’s traditional power structure, which revolves around Amharas and highly assimilated Oromos like himself,” said Faisal Roble from the US-based Institute for Horn of Africa Studies and Affairs.

“He praises Menelik II. He rebuilt his palace. He says he wants to make Ethiopia great again. But the Ethiopia that he romanticises is the one marginalised ethnic groups hate. The emperor he considers a great hero, others consider as their enslaver and conqueror,” Mr Faisal added.

These fears, Mr Faisal argued, were compounded by Mr Abiy’s decision to form the Prosperity Party (PP) last year, which replaced the Ethiopian People’s Revolutionary Democratic Front (EPRDF) – a coalition of four ethnically-based parties – that had governed the country since 1991, and had put him in office in 2018.

He said that previously the EPRDF only governed four of Ethiopia’s 10 regions. By creating a new party, Mr Abiy extended control over the whole country – except Tigray. “With this war, he has now also taken control of it [Tigray],” Mr Faisal added.

“What people were expecting from Abiy when he took office was the opposite – political pluralism, and greater recognition of the cultural and linguistic rights of the nations and nationalities that make up Ethiopia. But he prefers a unitary system of government, not a federal system.”

For Mr Menychle, the prime minister was neither a threat to political pluralism nor to any ethnic group.

“Unity does not mean that you will have to lose or hide the ethnic identity that has been around for thousands of years. All Mr Abiy is saying is: ‘Let’s move away from the situation where each politician thinks of his own ethnic group. Let’s stop the massacres. Let’s think of our country, Ethiopia, and let’s live in harmony, as brothers and sisters.’

“The PP has the prospect of doing that. It even brings together ethnic groups that were marginalised by the EPRDF, like Somalis,” Mr Menychle said.

“There is no blueprint for carrying the country into something new. You need discourse in an organised fashion, but you can’t have that when political leaders are in jail,” he said.

Expressing a similar view, Mr Awol said: “Transitions have to be inclusive. They can’t be dictated by one party. Mr Abiy has centralised power. He wants to be the individual from whom power springs.”

Mr Abiy received the Nobel prize partly because of his efforts to democratise Ethiopia, but primarily for the peace deal he reached with Eritrea’s President Isaias Akwerki to finally end the two countries’ 1998-2000 border war.

Expressing the view that Mr Abiy had been “prematurely” given the prize, Mr Knopf said: “Border crossings opened for a while, and then shut again. There was no written document on the terms of the peace agreement. There was a private understanding [between Mr and Mr Afwerki]. That is not how peace is sustained.”

“Eritrea had a major role in the war. There are reports that there were 20 brigades of Eritrean troops in Tigray. Ethiopian troops also withdrew to Eritrea,” he said, although both governments denied that Eritrean forces entered Tigray.

So does Mr Awol regret nominating Mr Abiy for the prize?

“If I had known then what I know now I wouldn’t have. But it is a double-edged sword. The Nobel prize gives you political capital, but it can also be a liability if you become known as the Nobel laureate who waged war.”

North Korean defectors: What happens when they get to the South?