“I don’t teach football aces to play. I coach teams.” This famous quote from Premier League legend José Mourinho, one of the most decorated football managers of all time, perfectly describes the approach of Davide Brivio, the man behind 2020′s potential triple crown winners. Now that he has helped guide Joan Mir to claim the 2020 World Championship at Valencia and helmed Team Suzuki Ecstar’s team championship effort, Brivio’s near-miss of the constructor’s championship demonstrates how far he has brought the Suzuki MotoGP effort.

We spoke with Brivio to discover what it takes to be a team manager and how Suzuki has gone from the returning new kids on the block to world champions. Watching Brivio’s tears of joy in the Suzuki garage as Mir crossed the finish line at Valencia, many MotoGP fans’ first thoughts were that “he did it again”; Brivio, after all, was behind Yamaha’s return to victory with Valentino Rossi in 2004. That he is the man behind Suzuki’s success in only the sixth season of its comeback in MotoGP—and during the 100th anniversary of the company, no less—is a simply perfect story.

As you often confess, the Suzuki project started from a white page. So how did you start?

Davide Brivio: I come from an area, the Brianza (not far from Milan), where all my friends and schoolmates played football. I loved motorcycle racing instead, especially motocross, and I dreamed of becoming a racer one day. I had no budget, but this didn’t prevent me from reading all the sports newspapers and following the races. I was passionate about motocross, and the Gilera factory was very close by. So when I was 14 years old I volunteered myself for the position of a mechanic, or assistant mechanic, for free. Nowadays, if I got a letter like this, I would laugh.

I did some motocross racing, but I was not fast enough. Once I realized I had no future as a racer, I had to reinvent myself. I started to follow motocross races as a reporter and then as a press officer in WSBK with Fabrizio Pirovano. It was not my ideal job, but for me it was a dream come true to walk in a paddock. I have been in World SBK for 11 years. In 2000, we came very close to winning the title with Noriyuki Haga and Yamaha, but ultimately Colin Edwards won and the following year I followed Haga to MotoGP. In 2002, I was with Marlboro’s Yamaha team, with Max Biaggi and Carlos Checa.

Which lesson did you learn from this first start?

Davide Brivio: That you have to be humble and pursue your dreams and skills. I started with positions that didn’t suit me perfectly, but they helped me to better understand our sport. I then became team coordinator, team manager, but I considered myself always “in progress.” I was observing, listening, and learning from the most experienced people around me, like Fiorenzo Fanali, for example, as he had been the mechanic of Giacomo Agostini and Eddie Lawson.… He helped me a lot. I used to read sports magazines, so for me the references were Kenny Roberts or Agostini running their teams.

How did you end up at the head of Rossi’s team?

Davide Brivio: In 2002, I joined Yamaha as team director with Lin Jarvis, who was managing director. Biaggi and Checa were our riders, but in summer 2002 Yamaha decided not to renew Biaggi’s contract. Marco Melandri replaced him in 2003, but it was a very difficult year. We didn’t score any podiums, except for Yamaha’s satellite rider Alex Barros in Le Mans on the wet. We needed to reorganize the team, especially because the 2005 season would be Yamaha’s 50th anniversary, so we wanted to do something big. The name Valentino Rossi came up, but it was a bit controversial. The majority thought it was a crazy idea. Why should he leave Honda for us, considering that we hadn’t been winning for the past 12 years? [Yamaha MotoGP head] Masao Furusawa made a big push to hire Valentino, and the duo of Rossi and Furusawa wrote Yamaha history. We won four titles together (in 2004, 2005, 2008, and 2009).

What did you learn from Rossi?

Davide Brivio: The winning mentality. When Valentino joined Yamaha, he taught us the winning approach—the necessary switch from winning a race to winning a championship.

Is this winning mindset what you brought to Suzuki?

Davide Brivio: Suzuki has a long tradition in racing. When I joined the company I brought this experience, but also my expertise in working with a Japanese company. We did it all together with their support. But the good thing is that they always followed up. Brivio has assembled a team that is motivated and all-in on Suzuki.MotoGP

What was the atmosphere at Suzuki when you joined the team? Were they different from the Japanese engineers you knew from Yamaha?

Davide Brivio: When I joined Suzuki, I found the atmosphere I had found in Yamaha 15 to 20 years before: They were humble, driven by the desire to win. They wanted to return to MotoGP. They had designed a V-4 engine, but they were thinking of four cylinders inline. As they were projecting the new engine they called me.

I remember one of the first meetings where I asked why Suzuki left MotoGP in 2011, and when I started to talk to them was the end of 2012. I started officially on the 1st of April 2013! At that time I was working with Valentino, managing his things privately, but I was attracted by the project: I was missing the managing side of the work.

What did you like most about the Suzuki project?

Davide Brivio: With Suzuki, the very nice thing is we really started from a clean sheet of paper. We needed to organize the team from scratch. I remember that I asked, “Where was the base of the team, what about the trucks, the equipment, the crates?” And they said, “We’ve got nothing!” There was no workshop and the trucks and the equipment were not theirs.  This made the whole process much more interesting. I will restart tomorrow!

What was the key to hiring the staff?

Davide Brivio: Suzuki is a big company, in good health, but the budget dedicated to races is less than other manufacturers. This pushed us to be more creative and effective. In hiring people I followed my intuition; I was looking for motivated people who really wanted to be part of the project. This was crucial to build a strong team. I wanted team members driven by ambition, passion, but also down-to-earth and calm, as I am. I always prefer a smile to a punch on a table. The urge to understand the other person and the situation comes first. I don’t like battles and fights when we work together.

Understanding the Japanese mentality was also crucial—they have method, while we Italians have genius, intuition, imagination. Together we are a perfect combination. From my past experience I brought the lesson that you have to listen to everyone. If a mechanic has advice, I’m open to listen and consider his idea. This attitude has built a lot of mutual trust in the team.

What about the rider choice?

Davide Brivio: As in the team we wanted dedicated technicians happy to join Suzuki—this was the same for the riders. Suzuki had to be their No. 1 priority. This has been crucial for today’s success. Coming from a satellite team, for Aleix Espargaró it was an achievement to join us. The same for rookies Álex Rins and Joan Mir.

You have a special talent to scout new riders.

Davide Brivio: We had the intuition to bring in young riders and to grow them up from the beginning, to create a kind of Suzuki rider. Our top management, especially our president, has always encouraged this approach. In a way, it’s much more challenging, but we are also proud of this.

When we started this project there was Maverick Viñales, who we took from Moto2 after only one year in that series. It was a successful choice. When he left for Yamaha, we did the same with Álex (Rins). We saw good results, so we decided to do the same with Joan Mir. Also Joan had only one year’s experience in Moto2, and he was only at his fourth season in the World Championship! Two years in Moto3, one in Moto2, and then jumping into MotoGP. And for Suzuki it’s even more challenging because we don’t have a satellite team; we don’t have a place where we can get young riders, wait for a couple of years to see how they are, and then move them into a factory team. We have to make a bet immediately!

Andrea Dovizioso says that the Suzuki is the most balanced bike.

Davide Brivio: We don’t have the most powerful engine, even if we had made some progress, but the chassis is excellent. The Suzuki is agile, light, with good handling. And then we have two talented riders because the bike also is not enough.

If there is a term to describe Suzuki’s key to winning, what would you say it is?

Davide Brivio: I would say, “Simple is better.” There are not too many sophisticated items on our bike. Sometimes our mechanics joke that we have a streetbike, but the point is, the engineers have done well to keep things simple and to introduce only those ideas that were working. The policy has been evolution instead of a revolution.

So what is Brivio’s winning method, and how can you repeat it?

Davide Brivio: There is no recipe, but I think there have been some crucial factors. Building an extremely motivated team, finding the right understanding between the European and Japanese mentalities to extract the best potential from both sides, investing on young talented riders and growing them in the team as a unique part of the project. Evolving all this together because, in the end, it’s a team achievement. Joan has been incredible, but Álex (Rins) is also part of this success because his support in the development has been essential. This year I would have bet on Rins, but then he got injured and it took a while to recover. Meanwhile Mir’s podium in Austria was a turning point. He made a switch and showed an incredible strong mentality in addition to his consistency and calm, on and off track. 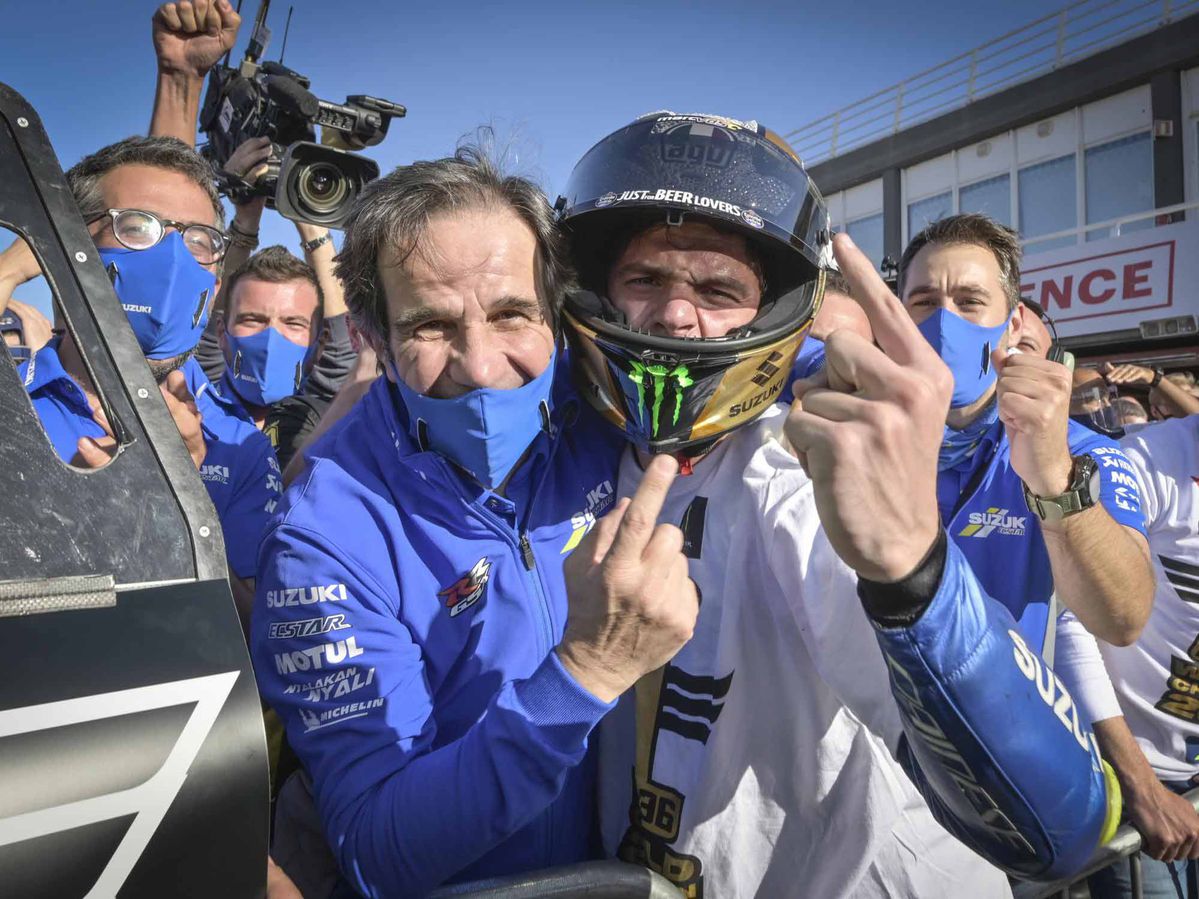 During the lockdown the preparation continued. What didn’t help us, in a way, were the doubleheaders. We at Suzuki are very fast to find the setup, while our competitors took advantage from returning to the same track, and they grew from one week to another. Apart from that, it was the COVID situation and the uncertainty that made things more difficult.

A season without Marc Márquez was quite special. How do you envision his return in 2021?

I really look forward to it. It would be great to see how these young kids will challenge the big champion. With one more year of experience and more confidence, I would say. I expect a great show.

Post-COVID Safety Measures At VR Parks You Need To Know

Apple is removing Parler from the App Store