In our series of letters from African journalists, Ghanaian writer Elizabeth Ohene takes advantage of the coronavirus pandemic to buck a beauty trend.

I recently took a major decision about my looks.

No, I haven’t gone under the plastic surgeon’s knife to tighten up the wrinkles, nor have I attempted a Botox treatment.

Instead, I am walking around with my grey – more like white – hairs exposed.

At 76, it is not exactly news that I should have white hair, but believe me, it has been a dramatic decision.

Time was when you could tell what stage in life a Ghanaian woman had reached by the way she wore her hair.

Up to about age 16 or 17, a girl kept her hair short. From then onwards, she could plait or braid or do whatever fancy things she wanted with her hair.

The end of grey hair

The boys and men kept their hair short, the time of “Afro” hairstyles being an exception, of course.

When it came to colour, everybody’s hair was uniformly black from birth until old age, when everybody had grey hair.

But at some point that changed.

I am not quite sure when black hair dye was introduced into Ghanaian society – some time in the 1950s, I have heard it said – but come it did. It was given the name “yoomo b3 Ga”, or abbreviated to “yoomo”, which is the word for an old woman in Ghana’s Ga language.

The full name for the dye translates as “there is no old woman in Accra”. 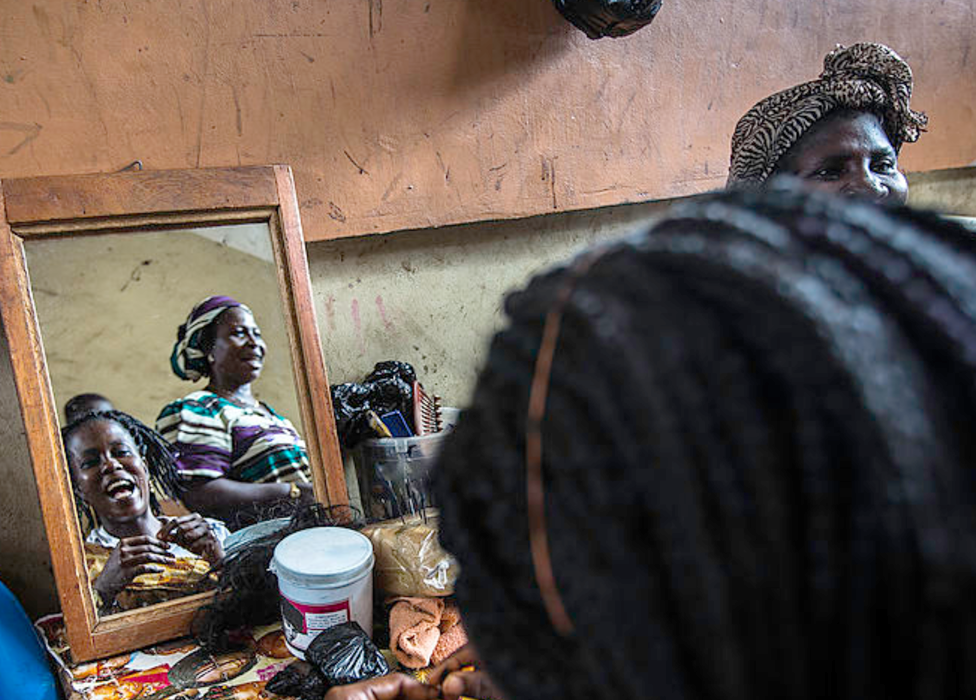 The hair colour of Ghanaian women remained black, from cradle to grave”

The phrase certainly indicated the seminal nature of the dye’s entry into Ghanaian fashion and culture.

The most distinctive feature of an old person, after all, had been the grey or white hair, but now, thanks to the black hair dye, there was no old woman in Ghana’s capital, Accra.

From there, the dye found its way into every nook and cranny of the country, and the enthusiasm with which “yoomo” was embraced was truly remarkable.

The hair colour of Ghanaian women remained black, from cradle to grave.

It has to be said that the enthusiasm for no grey hair was not limited to old women either. Gradually, the men took it up as well and eventually you couldn’t find any grey-haired people around, male or female, no matter how old.

The change in how the Ghanaian males wore their hair was even more interesting. Not all of them were resorting to black hair dye, they had an easier solution to avoiding the ageing look.

They simply didn’t allow a single hair on their heads – bald pates became the fashion.

The shaven heads also solved the problem of hair loss.

You would never have guessed how much men, especially youngish men, hated going bald.

These days you don’t see many balding men with wisps of hair hanging on. Everybody is clean shaven, both young and old men.

My own hair journey has not been very exciting really.

My black hair, like every other girl at that time, was kept short until about age 16.

I had thick, long, black hair from then until about age 50 when the grey hairs became dominant and I was persuaded to dye it all black, and so it has remained.

If I ever questioned myself about the dyeing regime, I consoled myself that I didn’t want to confuse immigration officials by presenting myself before them with grey hair when it says on my passport that I had black hair.

In this past Covid year, when going to the salon became problematic, I gave up on dyeing my hair and took to wearing a headscarf.

Two weeks ago, I out-doored the new white-haired me.

I am not sure if I am starting a new trend, but it does mean you will now find one old woman – yoomo – in Accra.

VW boss: ‘We have no forced labour’