A sharp increase in militant attacks in Mozambique’s northern province of Cabo Delgado has forced the government to reassess its strategy against the Islamist insurgency.

It has invited in US military advisers to support its own armed forces in the conflict.

What is the role of US forces?

The agreement between the Mozambican and US governments is for American soldiers to train local forces fighting the al-Shabaab militia – believed to have links to the wider Islamic state group (IS).

“US special operations forces… will support Mozambique’s efforts to prevent the spread of terrorism and violent extremism,” the US embassy in Mozambique said on 15 March.

“Clearly, the US is trying to extend its influence,” says Jasmine Opperman, an analyst for the Armed Conflict Location and Event Data Project (Acled), which monitors political violence globally.

But she adds that it’s a complex local conflict, and that “the US is framing the insurgency in a very over-simplified manner by referring to [the militants] as an extension of the Islamic State”.

Portugal, the former colonial power in Mozambique, has also committed to training the military.

“We will send a staff of approximately 60 trainers to Mozambique to train marines and commandos,” said a Portuguese official.

Although the Mozambican government is reticent about acknowledging their presence, private military contractors have been operating in the region alongside its security forces.

Initially in 2019, Russian mercenaries from the Wagner group were involved in the region.

More recently, the South Africa-based Dyck Advisory Group (DAG) was believed to have been invited by the Mozambican government to help it fight insurgents.

The DAG says it’s investigating the allegations made against it.

“When you hear these accusations of civilian casualties involving private military contractors, it reflects badly on the government,” says Emilia Columbo, a senior associate at the Washington-based Center for Strategic and International Studies.

There are also concerns over the effectiveness of these private contractors.

Acting US counterterrorism co-ordinator John Godfrey has said the involvement of mercenaries “has not demonstrably helped” the government of Mozambique in countering the threat it faces from militants.

Cabo Delgado has long experienced instability, but the recent surge in Islamist-linked violence started in 2017.

It’s a region with high levels of poverty and there are grievances over access to land and jobs.

But Cabo Delgado’s importance for the government, and a further reason for local grievance, lies in the rich off-shore natural gas reserves currently being explored in collaboration with multinational energy companies.

It appears that the militants have had significant success in finding recruits both from within the province and further afield.

“I would say based on how quickly they spread, it speaks to a huge increase in recruitment”, says Emilia Columbo.

“We get reports of boats full of youths getting intercepted on the way to Cabo Delgado.” 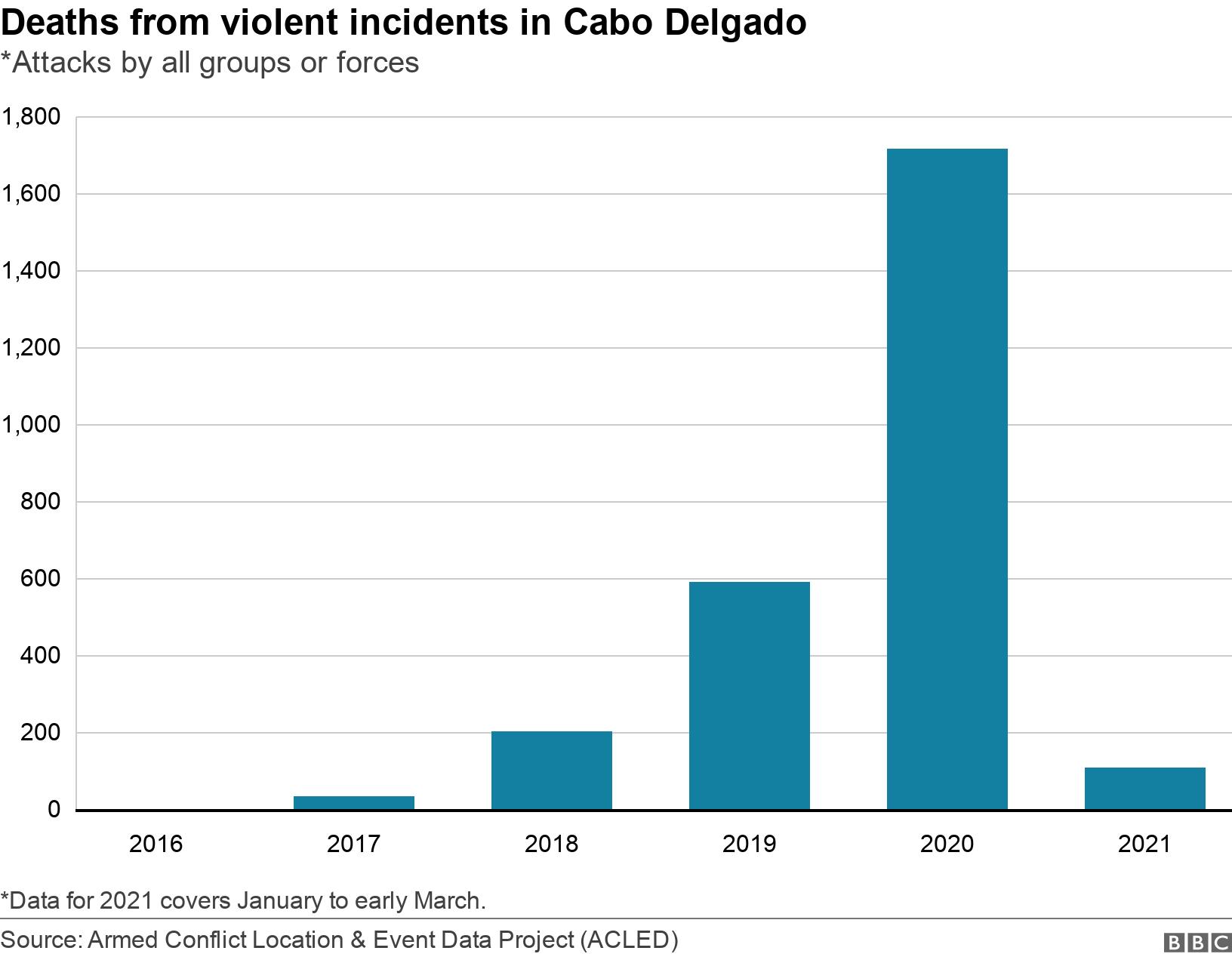 Acled has recorded more than 570 violent incidents from January to December 2020 in the province.

These have included killings, beheadings and kidnappings, with deaths from attacks carried out by all groups involved in the conflict rising sharply last year.

The most horrifying incident was of 50 people beheaded in a sports field over the course of a weekend. 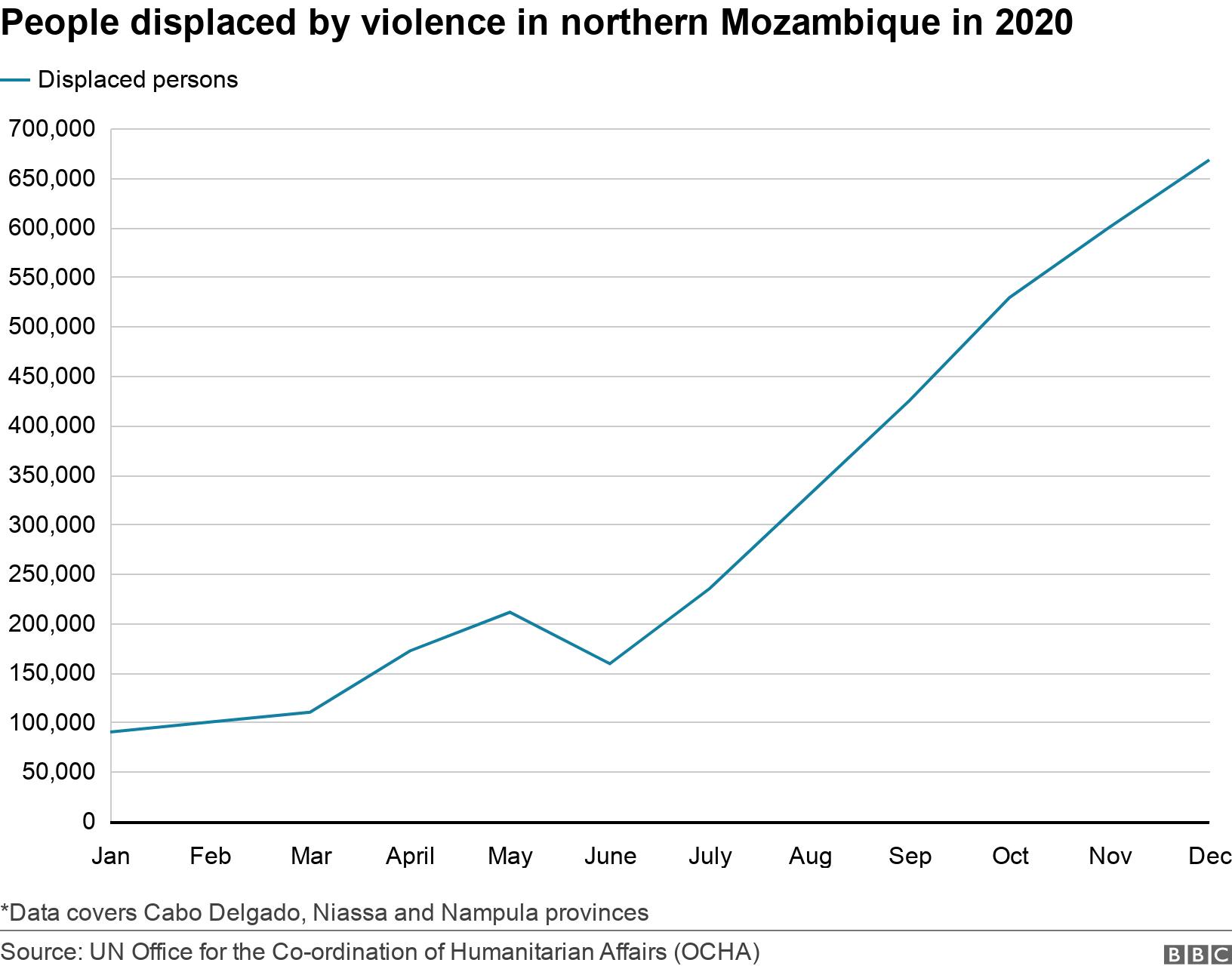 Human rights groups have reported the extensive destruction of buildings throughout northern Mozambique by the militants. The instability has led to huge numbers of people leaving their homes in areas where conflict has erupted.

Nearly 670,000 people were internally displaced in Cabo Delgado, Niassa and Nampula provinces by the end of 2020, according to the UN Office for the Coordination of Humanitarian Affairs.

Britney Spears asks judge to remove her father as her conservator