A 1,000-strong Rwandan force has hit the ground running since its deployment in Mozambique to fight poor insurgents who have carried out devastating attacks in the far north of the country.

In two weeks, the troops – the first foreign force to be deployed against the insurgents – have taken a key road junction, held by the militants for the past year, and have reached the port town of Mocímboa da Praia.

In four years the insurgents have taken control of most of five districts in Cabo Delgado province in the north east of Mozambique.

So far 3,100 people have been killed and 820,000 displaced – more than the entire population of the five districts.

Mozambique’s defence forces are widely regarded as corrupt, poorly trained and ill-equipped and were no match for a growing but still rag-tag band of insurgents.

Despite opposition within his own party, President Filipe Nyusi called for foreign help.

There is broad agreement that the uprising was begun by young people without jobs protesting about growing poverty and inequality, as well as the lack of any gains from mineral resources including rubies and gas.

This is compounded by social injustice – the lack of a voice and abuse by government officials, police and soldiers.

The conflict started with a symbolic attack on Mocímboa da Praia in 2017 and escalated as the young people captured weapons from soldiers and gained local support.

‘Tenuous’ links with IS

The rebels are called “al-Shabab”, which in local language means “the youth” and has no connection to the group of the same name in Somalia.

The conflict zone is majority Muslim, and by 2019 the rebels had made contact with the Islamic State (IS) group.

The US has named them “Isis Mozambique” and designated them a foreign terrorist organisation.

But the insurgents have no real religious message and instead say they are fighting the state.

And they still primarily fight with weapons and vehicles captured from Mozambique’s security forces.

The International Crisis Group (IGC) think tank recently said the insurgents had only “tenuous links” with IS and the “real drivers of [this] conflict have more to do with local grievances”.

No-one will send soldiers to Mozambique to help it fight hungry locals, but many will support a fight against IS.

Portugal, the former colonial power, and the US already have soldiers in Mozambique training the army to fight the insurgents.

But Mozambique has a mixed history with those three, and wants to keep them at arms length.

The compromise was Rwanda, which has a very professional army. 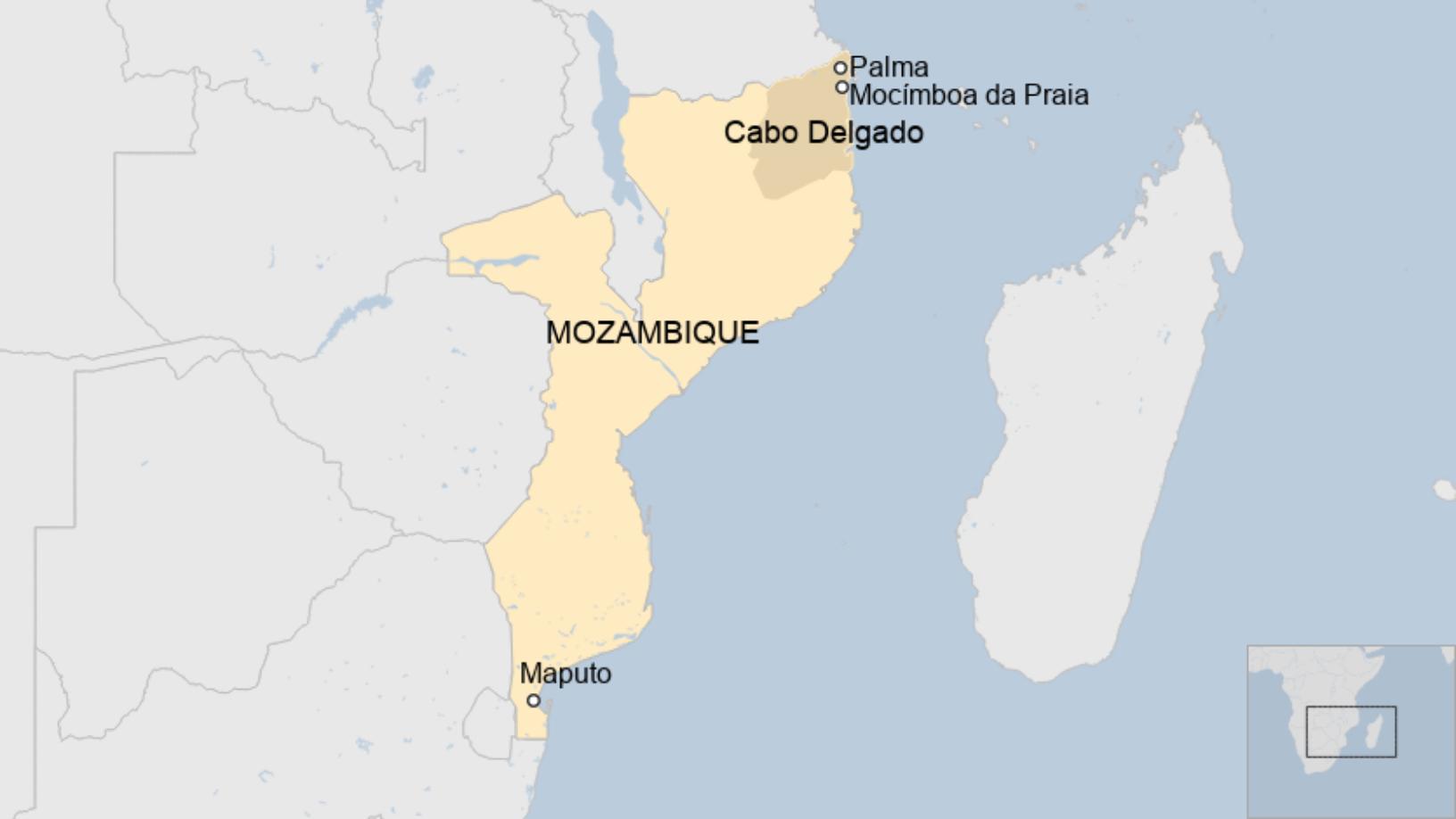 Just 10 days after President Nyusi flew to meet his Rwandan counterpart for talks in April – a reconnaissance team of Rwandan officers was in Cabo Delgado.

Diplomatic sources say the US approved the deployment. Rwanda has also built close links with Israel, which would encourage an anti-IS operation.

Once Rwandan troops were on the ground and fighting, the Sadc mission was allowed in.

South African ships and planes arrived in Pemba over the weekend near the war zone and armoured convoys with the first of 1,500 South African soldiers drove into Mozambique.

They include members of the special forces 43 Brigade. Botswana armoured vehicles and 300 soldiers have also crossed into Mozambique.

Rwanda says its troops are there as long as necessary, and it is expected they will eventually create a security zone around Palma and the nearby gas installations. The hope is that Total would feel safe enough to return to work next year.

Initially, South African troops are in Mozambique for only three months. And nearly 3,000 troops plus air and sea power should make relatively quick work of recapturing roads, towns, and Mocímboa da Praia port.

But the insurgents are already abandoning the bases and breaking up into small groups, as guerrillas under pressure normally do. Parts of the war zone are extremely dense jungle which provides excellent cover.

Also the war zone has long isolated roads which are excellent for snipers, and for the past seven years Renamo – an armed opposition group with representation in parliament – has shown that a few snipers can create chaos by sporadically closing the main north-south road.

And if the IS line is correct, then it is highly likely to send money, weapons and jihadists to take over the local war and escalate it. This war will not be over; it will simply be pushed back to where it was two years ago.

Earlier this year, Amnesty International accused both government and insurgents of “war crimes”, so many people will be frightened by the return of Mozambican soldiers and police. And the insurgents are local people, known to their communities.

They captured both Palma and Mocímboa da Praia last year by first sending locally known members into the town to stay with family or supporters.

Interviews with people captured and released by the insurgents confirm that many are only there for money and plunder, and would leave the insurgency if they were offered a reasonable job with a future.

A few thousand jobs could end the war. But nations prepared to send expensive troop battalions will not pay to create no-questions-asked, long-term jobs.