Legal discrimination along racial lines in South Africa ended with the demise of apartheid but racial categorisation is still being used by the government for monitoring economic changes and continues to cause controversy, as Mohammed Allie writes from Cape Town.

The charge of fraud made three months ago against teacher Glen Snyman for ticking the “African” box on his application form when applying for a head teacher job in 2017 has highlighted the country’s ongoing problem with racial classification.

Mr Snyman, who was defined as coloured (mixed racial heritage) by the apartheid government, subsequently had the charge dropped by the local authority but the issue the case raised has not gone away.

The Population Registration Act was the cornerstone of the apartheid policy that legalised discrimination. It was introduced in 1950 and divided South Africans into four broad groups – white, African, coloured and Indian – to enforce the minority government’s policy of racial segregation.

It was repealed in 1991 as the country moved towards democratic governance in 1994 but racial classification is still very much part of the conversation in the country. 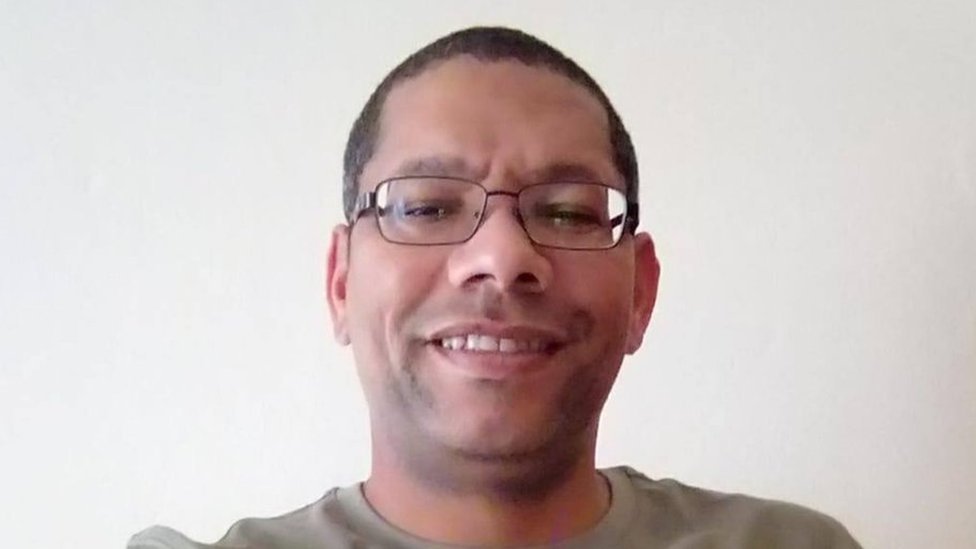 The government uses it to gather data to help redress the stark imbalances in income and economic opportunities that are a legacy of the official racism of the past.

But many in the country, including Mr Snyman, who founded the organisation People Against Racial Classification (Parc) in 2010, believe the use of the categories has no place in a democratic South Africa.

“The fact that the Population Registration Act was scrapped gives job recruitment officers, any government or private system, no legal right to classify any South African by race,” he wrote in a submission to the country’s Human Rights Commission.

‘Use class, not race’

While acknowledging there are still huge imbalances that need to be redressed, Mr Snyman suggests that government should instead use a poverty measure to replace racial classification as a means of giving those in need a much-needed leg-up.

“The government doesn’t have to know the identity of people by groups, they need to know the people who are in need of services, jobs or whatever the need might be.

“The government and private sector should deliver to all South Africans equally and not discriminate on identity,” he said.

Ryland Fisher, a former newspaper editor who initiated the One City Many Cultures project in 1999 while at the Cape Times, agrees.

“If we adopt class as the marker for redress we will inevitably be able to benefit more black people,” he said.

“If you say you will redress on the basis of class, a black person who has lived a life of privilege won’t qualify for economic opportunities via the government’s affirmative action policies.”

During the 1970s when the anti-apartheid struggle was gaining momentum, and inspired by the Black Consciousness Movement led by famed activist Steve Biko and the South African Students Organisation, many among the disenfranchised – African, coloured and Indian – identified as black in a statement of solidarity in the fight to topple the apartheid regime.

‘We regard ourselves as black’

And it is in this vein that Mr Snyman has received support from the country’s largest teaching union, the South African Democratic Teachers Union.

“Many of us have made a conscious decision not to identify with the racial classification as prescribed by the apartheid regime. We regard ourselves as black, African, South African,” says the union’s Western Cape spokesperson Jonavon Rustin.

Pointing to a much more nuanced understanding of identity, he adds that “some people embrace the ethnic classification of coloured, Khoisan, African, Xhosa, Zulu, white, Camissa African, Korana African, Griqua, European, Afrikaner and so on.”

But some make a distinction between a political or cultural identity and addressing the imbalances created by apartheid. 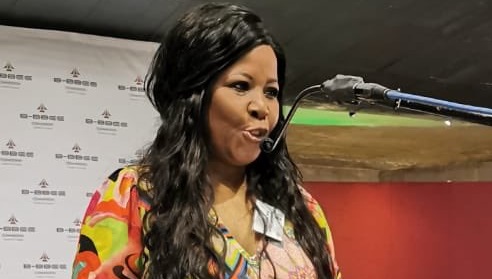 No-one is permitted to use the racial or gender classification for purposes of excluding any citizen from enjoying the rights in the country, that would be illegal”

Zodwa Ntuli, South Africa’s Broad-Based Black Economic Empowerment (B-BBEE) Commissioner argues that as much as racial classification is an anomaly in a country trying to move away from its race-based past, regulators and government can only measure progress through statistics based on the old categories.

The impact of apartheid discrimination against Africans, Indians and coloured people, she points out, was so pervasive that white people continue to dominate the economy in terms of ownership and decision-making power.

But she stresses that “no-one in South Africa is permitted to use the racial or gender classification for purposes of excluding any citizen from enjoying the rights in the country – that would be illegal”. 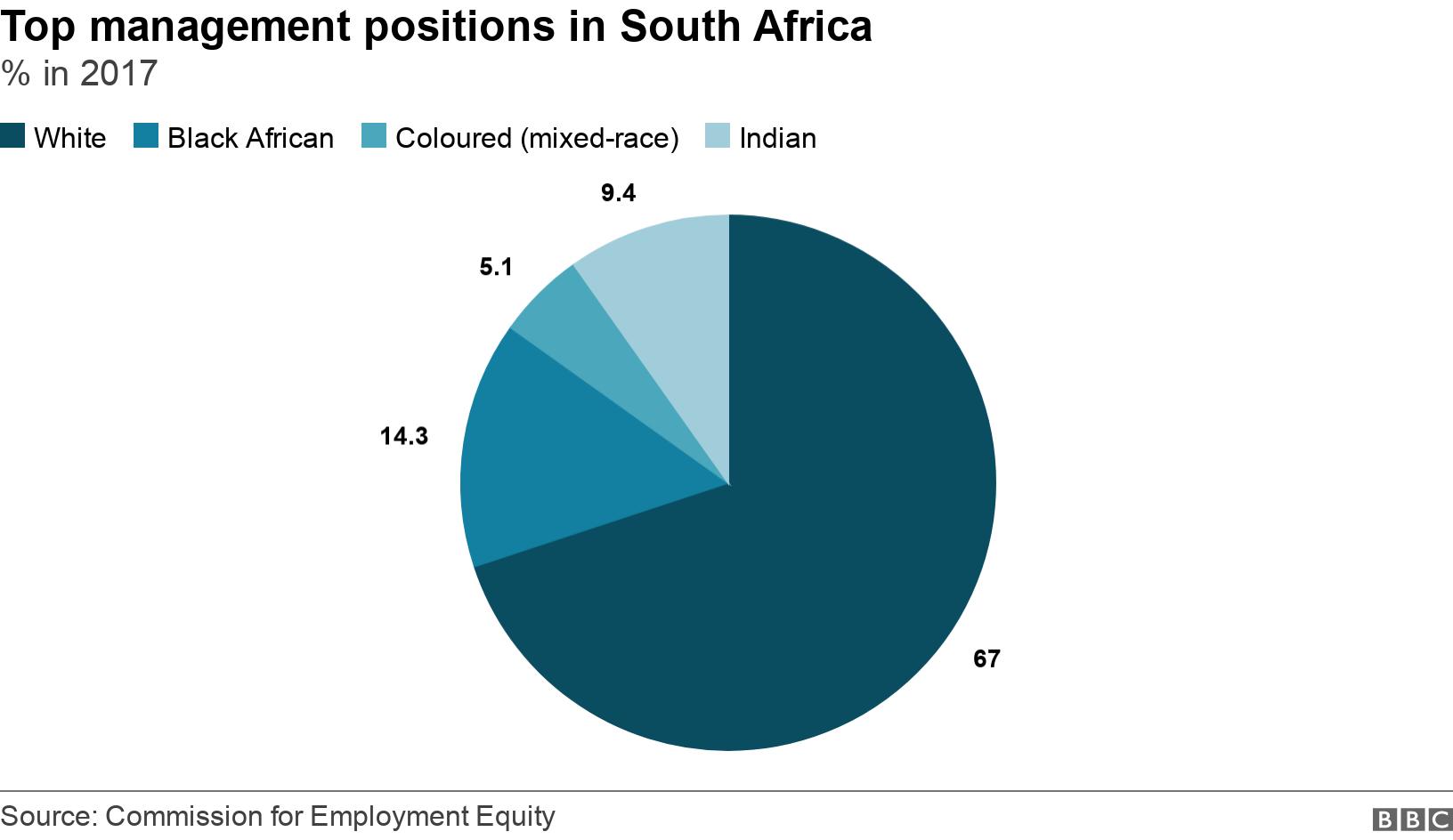 Kganki Matabane, who heads the Black Business Council, says that even though democratic rule is nearly 27 years old, it is still too soon to ditch the old categories.

“We need to ask: Have we managed to correct those imbalances? If we have not, which is the case – if you look at the top 100 Johannesburg Stock Exchange-listed companies, 75% or more of the CEOs are white males – then we have to continue with them.”

As apartheid discriminated on the basis of race then that is the only way the problems can be dealt with, rather than looking at class, he adds.

“We can only have a sunset clause when the economy reflects the demographics of the country. Until it gets to that, it will be premature to talk about the end of black economic empowerment.”

But in some cases the continued use of racial classification to monitor change has led to the hardening of the categories.

In the Western Cape, which has a large number of people formerly classified as coloured, there is a long-standing feeling among some that in an effort to redress the problems from the past, the democratic government has ignored their needs.

In Cape Town, a group of activists who identify as coloured, started a pressure group called the Gatvol (“fed up”) Capetonian movement in 2018.

In an introductory video on the group’s Facebook page, their leader Fadiel Adams explains that “all arms of government have declared an economic war on the coloured people”, complaining that there are no jobs for members of the community despite them making up the majority in the area.

Mr Fisher, the former newspaper editor, said people who were classified as coloured were happy to fight alongside black people in the anti-apartheid struggle. But he blames the African National Congress (ANC) government for the sharpening of racial differences.

“What has happened in recent years is that the majority [in Western Cape] has decided to raise their voices and to assert their right to identify as coloured.

“The ANC didn’t really take into consideration these kinds of nuances. They alienated people who identified themselves as coloured. What it meant is that these people… identified the kind of things that could affirm their identity as coloured people including things around culture, food, music and language.”

He, and others, accuse the ANC-led government of not doing enough for coloured people, and instead concentrating on the national majority, who are officially classified as African, or black.

‘We need to identify as South Africans’

Dr Saths Cooper, a clinical psychologist who was an associate of Steve Biko during his student days in the 1970s, argues that dominance of a racial identity has prevented the forging of a truly common identity.

“We haven’t learnt we are human beings first,” he says.

“We always put a colour, we put external attributes to it and then we put maybe language and maybe belief to it and that allows for further division. That narrative then perpetuates itself.

“We haven’t given people enough reason to say we identify as South Africans.”

Mr Snyman, through Parc, is meanwhile continuing the fight to outlaw racial classification. “We will take all steps, including legal ones to rid South Africa of this scourge that has once again led to discrimination against those who do not meet the preferred criteria of the present government.”