Rwanda has deployed what it called a “protection force” to the Central African Republic after its peacekeepers there were attacked by rebels advancing to the capital, Bangui.

The Rwandan and CAR governments have accused ex-President François Bozizé of backing the rebels and plotting a coup, which he has denied.

UN peacekeepers have said the rebel advance has been halted.

Mr Bozize has been barred from a presidential election due on Sunday.

Russia has also sent “several hundred soldiers and heavy weapons” to the country to support the government, the AFP news agency quotes a CAR government spokesman as saying.

“The Rwandans have also sent several hundred men who are on the ground and have started fighting,” he added.

The number of additional Rwandan soldiers deployed has not been given but the defence ministry said the operation was done “under existing bilateral agreements” with CAR.

At least 750 Rwandan soldiers and police officers have been operating under the UN peace keeping force Minusca.

Minusca forces have also been deployed beyond Bangui “to block armed elements”, AFP quotes a UN spokesman as saying.

President Faustin Archange Touadéra has insisted Sunday’s election will go ahead, saying the presence of the army and UN peacekeepers means people have nothing to fear.

But opposition parties, including that of Mr Bozizé, have called for the vote to be postponed “until the re-establishment of peace and security”.

Rebel groups have seized several towns close to CAR’s capital, clashing with government forces and looting property, and the UN said its troops were working to prevent a blockade of Bangui.

Mr Bozizé’s spokesman Christian Guenebem said: “We categorically deny that Bozizé is at the origin of anything.” 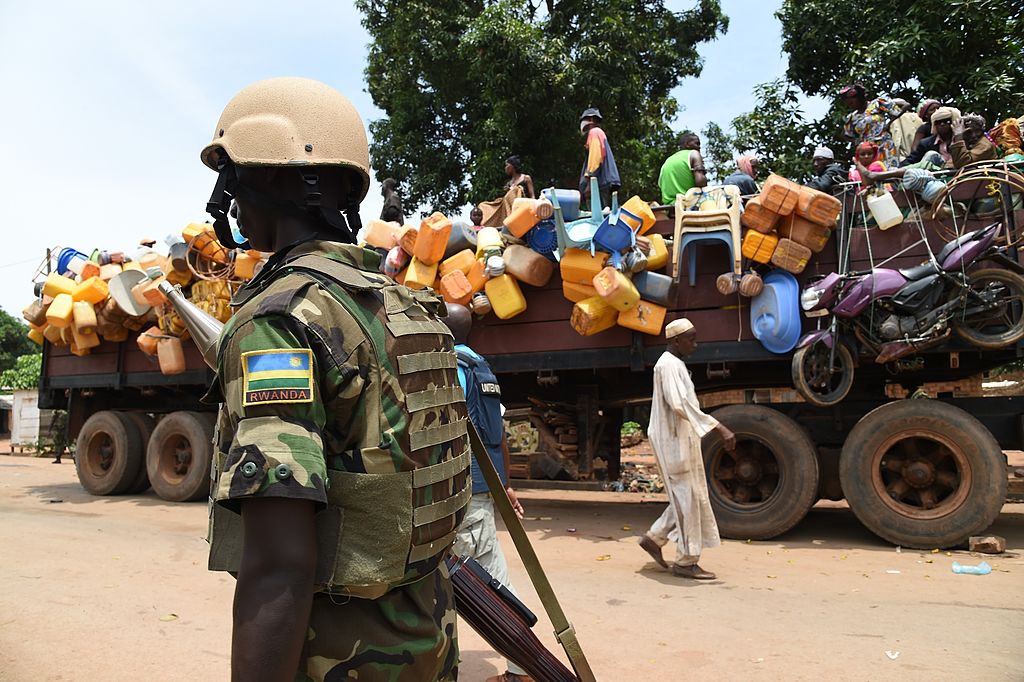 The CAR is one of Africa’s poorest and most unstable countries, even though it is rich in resources like diamonds and uranium. The UN estimates that half of the population are dependent on humanitarian assistance and up to a fifth have been displaced.

On 3 December CAR’s Constitutional Court ruled that Mr Bozizé did not satisfy the “good morality” requirement for candidates because of an international warrant and UN sanctions against him for alleged assassinations, torture and other crimes during his rule.

Who are the key players in this crisis?

Mr Bozizé, a Christian, came to power after a coup in 2003 and subsequently won two elections that were widely seen as fraudulent. He was ousted in 2013 by the Séléka – a rebel coalition drawn largely from the Muslim minority – which accused him of breaking peace agreements.

The country has since been caught in conflict between the Séléka and the so-called “anti-Balaka” self-defence forces, who are mainly Christian.

After military intervention by France, the country’s former colonial ruler, elections were held in 2016 and won by President Touadéra, who is currently seeking re-election.

But fighting among militias has continued, and the UN has blamed rebel groups for the country’s instability.

Mr Bozizé, 74, returned to the CAR in December 2019 after living in exile for six years in Benin, Cameroon and the Democratic Republic of Congo.

He announced in July he would stand in the 27 December election – a move that was seen as high-risk given the country’s lingering civil unrest, but not unexpected.

Mr Bozizé still maintains a large following, especially in the army and among the country’s largest ethnic group, the Gbaya.

But he faces UN sanctions for his alleged support of the “anti-Balaka” groups in 2013. CAR authorities have also issued an arrest warrant against him for “crimes against humanity and incitement of genocide”.

What is the threat now?

On Saturday, the three main rebel groups announced they had formed an alliance called the Coalition of Patriots for Change (CPC), and accused President Touadéra of trying to rig the upcoming election.

In a statement, the CPC invited “all other groups to join” and called on members to “scrupulously respect the integrity of the civilian population”.

As election campaigning heats up, Facebook said last week it had identified rival disinformation campaigns to influence the vote – masterminded by individuals with links to the French military and prominent Russian businessman Yevgeniy Prigozhin.

Moscow has fostered close ties in recent years with the CAR. Russian military advisers are currently stationed in the country to help train government forces.

Reports by UN investigators, the US military and journalists have also documented activity in the country by the Wagner Group, a private military firm allegedly owned by Mr Prigozhin.

US state declares pro-meat day in row with neighbour

‘Why I quit my job after my home burned down’

Covid in California: The state is struggling to contain the virus