In the battle for investment survival, you can learn a lot from judo. The first and most important lesson in that martial art is the same for the stock market today: damage control.

And it’s especially true when the market is heading into a major correction, such as the coronavirus stock market crash that began on Feb. 25, 2020, as the IBD Big Picture column noted the same day.

Judo masters begin not by learning how to throw, but how to fall. They practice this skill until it’s as natural as breathing. No matter how many times they’re flipped, they can rise to fight again.

Highly successful stock pickers go through similar training: They must learn how to cut their losses short. This means selling a stock when it’s down 7% or 8% from your purchase price.

Sounds simple, but many investors have learned the hard way how difficult it is to master the most important rule in investing.

No one wants to sell for a loss. It’s an admission that you made a mistake. But if you can set your ego aside, you can take a small loss and still be fit enough, both financially and mentally, to invest the next day. Cutting losses quickly prevents you from suffering a devastating fall that’s too steep to recover from.

The Mathematics Of Investment Losses

Consider the math. Say you buy a stock at 50. For whatever reason, it drops 8% to 46 during the next few days. You promptly unload it and move on. To reclaim that loss, you need to make an 8.7% gain on your next purchase with your remaining capital, which shouldn’t be hard to do.

What if you hold on?

You’re sure the stock will snap back. Your research convinces you it’s worth $100, so why get scared by a minor setback?

There’s one problem. The market doesn’t care who you are, what you think, or how much you believe in a stock. It says you miscalculated, at least in the short term — a message that gets louder as the stock drops 25% to 37-1/2. To get back even, now you need a 33% gain, which is much tougher to come by than that easy 8.7%.

What if the market really doesn’t like your stock and slices it in half to 25? You don’t need a calculator for this one: To recover a 50% loss requires a 100% gain. How many stocks did you pick last year that doubled in price?

In the Dec. 30, 2019, edition of the IBD Big Cap 20, Intuitive Surgical (ISRG) ranked No. 8 on the list. The stock has been famous for making some really strong gains after high-volume breakouts in past bull markets, including the one from 2003 to 2007. Yet since the end of 2018, the robotic surgery systems innovator wasn’t making a whole lot of headway.

The stock peaked at 616.56 (pre stock split) in the first full week of January 2020, then traced a mild six-week flat base. Add 10 cents to the highest price on the left side of that base, or 616.56, and you get a 616.66 proper entry point. On Feb. 19 — just days before IBD downgraded the current outlook for stocks to “uptrend under pressure” (Feb. 24) and then “market in correction” (Feb. 25) — the stock cleared that buy point. But volume increased just 12% above its average.

The  next day, on Feb. 20, shares rose just 0.6% in below-average volume. For an emerging breakout, that’s a real no-no.

No wonder, as the market correction unfolded, Intuitive showed poor action. On Feb. 24, shares gapped down in heavy volume and fell through the 50-day moving average. That’s a key defensive sell signal after growth stocks make a strong run. The next day, Intuitive fell more than 7% below the 616.66 buy point. Time to cut losses and preserve capital.

By March, Intuitive Surgical dived to a low of 360.50, falling more than 41% below the buy point.

No Big Tech Winner Is Immune To A Big Loss

In the week ended Aug. 24, 2018, the specialist in gigabit-speed data switches used in data centers cleared a 311.77 buy point in a sloppy base. That base was also late stage, and thus high-risk. Arista rose no more than 2 points above the entry, calculated by adding 10 cents above the base’s prior high of 311.67. Then it headed south fast.

Cutting losses at 7% meant exiting Arista near 289.95 in early September that year. The stock kept sliding. By the end of December, shares reached as low as 187.08, or 40% below the original buy point.

If you limit losses on initial purchases to 7% or 8%, you can stay out of trouble, even if only one out of four buys delivers a modest profit of 25% or 30%. You can be wrong three out of every four times and still live to invest another day. 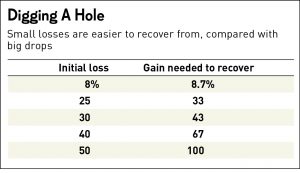 You Can Still Win Big With Many Small Losses

A .250 batting average is nothing to crow about. But even the best hitters in baseball fail more than they succeed. Consider Tony Gwynn, who in 1999 became the 21st member of pro baseball’s 3,000-hit club. That year, the former San Diego Padres outfielder finished the season with a batting average of .338. That means he was coming up empty nearly two out of three times at the plate.

You likely never saw Gwynn fret after grounding out. The same is true for successful investors. They calmly take a small loss and look for the next potential winner.

So leave your emotions behind. Cutting losses with discipline will help keep your head clear when it’s time to return to the market. A great paradox of investing is that the ripest buying opportunities occur just after bear markets — when the major stock averages have declined 20% or more.

That’s exactly when most investors who haven’t cut their losses are reeling and don’t want to be hit again. It’s hard to think straight after losing thousands of dollars. But the market always recovers. What kind of shape will you be in?

A version of this column originally ran in the Aug. 23, 1999, edition of IBD, and again on April 14, 2020. Gwynn’s last season was in 2001. His career batting average held at .338, according to Baseball-Reference.com. Please follow Saito-Chung on Twitter at @SaitoChung and at @IBD_DChung for more commentary on growth stocks, breakouts, sell signals and financial market insight

Also In Investor’s Corner: When To Cut Your Stock Losers Quicker Than 7% Or 8%

Inside IBD Big Cap 20: Exactly When Should You Cut Losing Stocks Short?

How Leaderboard Charts Can Help Investors Sell At The Right Time

When To Sell Stocks Correctly: Inside IBD University

Norwegians got paid to use electricity as prices fall below zero