Rescue teams in the Turkish port city of Izmir are hunting through the rubble of collapsed buildings for survivors of Friday’s powerful earthquake.

The death toll from the quake, which also struck the Greek island of Samos, has risen to 30, with over 800 injured.

A mother and three children were freed in Izmir 18 hours after the quake, as hundreds of aftershocks hit the area.

The US Geological Survey (USGS) said the earthquake was 7.0 magnitude, but Turkey put it lower at 6.6.

The shallow tremor triggered tidal waves that hit coastal areas and islands in both Turkey and Greece.

Twenty-eight people were killed in Izmir, in the west of Turkey, officials said. A girl and a boy died in Samos when a wall collapsed on them.

Work continued through the night to search for survivors in 20 buildings in Izmir that were destroyed as a result of the earthquake.

Officials said search and rescue operations had been completed in eight buildings, while operations continued in nine other locations.

A mother and three children who had been trapped for almost 18 hours under a building were brought out by rescuers.

Efforts were continuing to rescue the woman’s fourth child.

“We are delighted to be hearing miracles happening as a result of diligent work by rescue teams,” Izmir Mayor Tunc Soyer told local TV.

Some 100 survivors have been pulled out alive from the rubble so far, Turkey’s Environment and Urbanisation Minister Murat Kurum told reporters.

Authorities in central Izmir have set up a tent area to house about 2,000 people overnight, amid fears that more buildings could collapse.

But their work has been hampered by nearly 400 aftershocks, according to Turkey’s national disaster agency Afad, with 33 of these more powerful than 4.0 magnitude.

Rescuers are working hour after hour searching for life under mounds of crushed concrete.

There are clusters of distraught relatives outside a flattened apartment block, which was eight stories high. As many as 40 residents are still unaccounted for – among them 15-year-old twins.

Field kitchens and tents have been set up for those who are homeless and traumatised.

Turkey is now suffering from collective aftershock – as local TV channels provide continuous coverage of the rescue efforts. This was the second powerful earthquake this year. There are renewed fears about the active fault lines beneath the country. Many worry when the next deadly quake may come.

What happened on Friday?

It said the quake – which was felt as far away as Athens and Istanbul – struck at a depth of 21km (13 miles), although Turkish officials said it was 16km below ground.

Most of the damage occurred in Izmir, off Turkey’s Aegean coast – where the tremor sent many people running out into the streets in fear and panic.

There were reports of flooding in Izmir after the sea level rose, with one person killed after their wheelchair was hit and overturned by rising water. 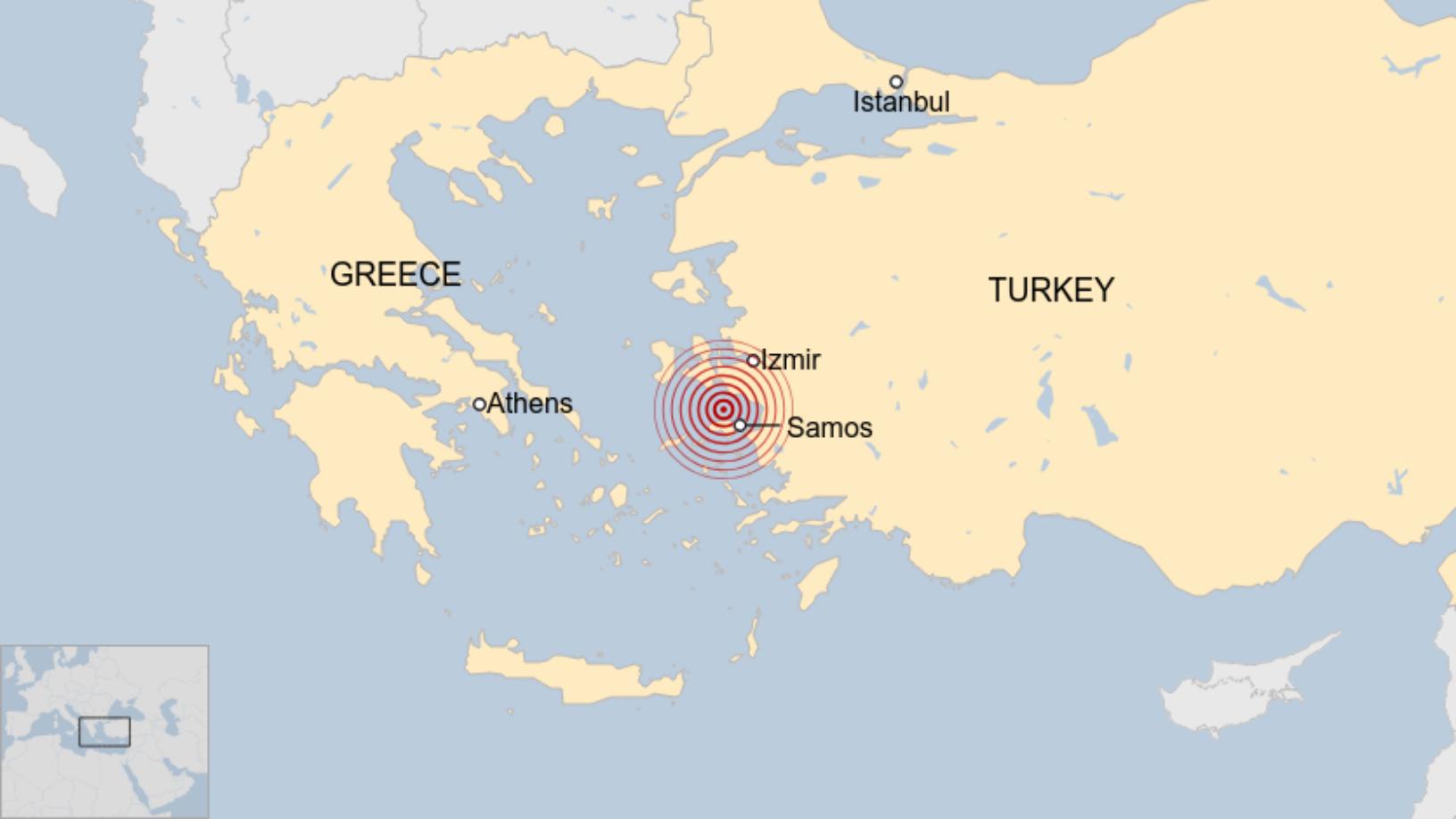 Izmir is Turkey’s third largest city with a population of nearly three million.

Two teenagers were killed when a wall collapsed on Samos. Eight people were injured across the island, where about 45,000 people reside.

He said it was the biggest tremor to have hit the island since 1904.

Residents were urged to stay outdoors and keep away from coastal areas.

Mr Erdogan later responded in a tweet: “Turkey, too, is always ready to help Greece heal its wounds. That two neighbours show solidarity in difficult times is more valuable than many things in life.”

In January more than 30 people were killed and more than 1,600 injured when an earthquake struck Sivrice in Turkey’s eastern Elazig province.

In July 2019, the Greek capital Athens was hit by a tremor that knocked out power to large parts of the city.

A powerful quake that struck the Turkish city of Izmit, near Istanbul, in 1999 killed about 17,000 people.

Are you in an area affected by the earthquake? If it is safe for you to do so share your experiences by emailing haveyoursay@bbc.co.uk.

France-Algeria relations: The lingering fallout from nuclear tests in the Sahara