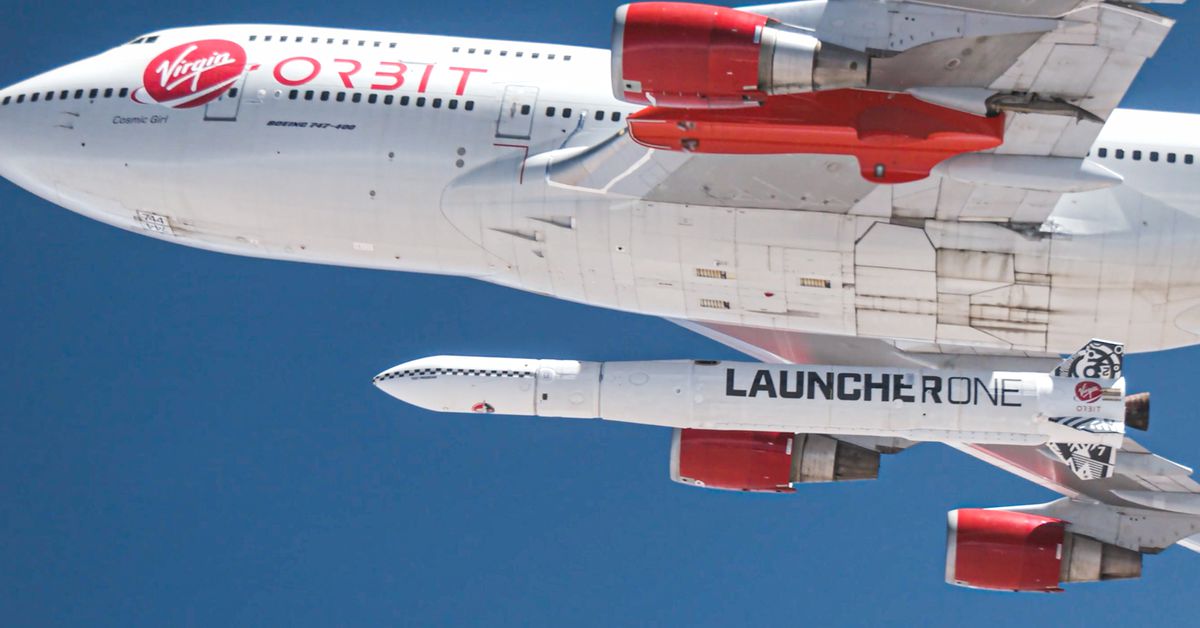 Update January 17th 5:34PM ET: Virgin Orbit’s rocket reached orbit and the satellites were released, meaning Sunday’s mission was a success. The headline has been updated to reflect this. The original story is below.

Virgin Orbit — the sister company of billionaire Richard Branson’s space tourism outfit Virgin Galactic — will try a second test of its small satellite-launching rocket later today, months after it failed to reach orbit during a first attempt. It will also be the first time that the company tries to launch working satellites into space on behalf of NASA.

Sometime after 1PM ET, Virgin Orbit’s customized Boeing 747 will take off from Virgin Galactic’s spaceport in the Mojave desert and ascend to 35,000 feet with the satellite-launching rocket attached to its wing. Once it reaches a predetermined location, the rocket is supposed to drop and ignite, taking the small satellites on board the rest of the way into orbit around the Earth. Virgin Orbit says the window for launch will last until 5PM ET.

With operations for our #LaunchDemo2 mission already in full swing, it’s an exciting morning here at Mojave Air and Space Port!

LOX loading on the rocket has begun, and we’re looking good to hit our target takeoff time of approximately 10:30 AM Pacific. pic.twitter.com/naBppEJRhD

There is no live stream of the test, though the company plans to tweet updates throughout the flight. It will make photos and video available sometime after the test is completed.

Virgin Orbit has spent years developing this method of airborne rocket-launching, and it has performed increasingly complex flight tests since 2018. But the first full test of the company’s rocket-launching capabilities in May of last year did not go completely as planned. The plane ascended correctly, the rocket dropped, and the main engine ignited. But a problem in the liquid oxygen fuel line prevented the rocket from reaching orbit.

Dan Hart, Virgin Orbit’s CEO, said during a conference call earlier this month that the company has made changes to those propellant lines and done an “enormous amount of testing” since May, despite the pandemic.

“Watching [Virgin Orbit] rise to the occasion and dive into the details and drive the maturation of the system, and doing it in a pandemic environment, is really amazing to watch,” Hart said.

Technical fixes aside, another difference between the previous test and this one is that Virgin Orbit will be attempting to deliver real commercial payloads for a customer for the first time: NASA. The space agency has tasked Virgin Orbit with carrying 10 different small satellites for various universities. Each will perform a variety of missions, from cleaning up space debris, to practicing inspection and maintenance of other spacecraft, to making weather observations. A full list is available on Virgin Orbit’s website.

This mission was supposed to take place back in December, but was delayed because some members of Virgin Orbit’s launch team had to quarantine. Hart said Virgin Orbit has “done a huge amount to ensure the safety of the team” ahead of today’s launch. A big part of that is having people work remotely, but for those who have to be on site, Hart said Virgin Orbit is enforcing social distancing, making employees use PPE, disinfecting spaces, and installing air purifiers. “Every single tool that you can imagine that is out there in industry, we have applied, but we have a team that’s eager, that’s focused,” he said.

The launch attempt was rescheduled to earlier this month, though that has slipped a few times now to today’s window. The company tweeted on Saturday that the hardware is “in great shape” and that the weather looks favorable.

Virgin Orbit’s approach to launching satellites is quite different from that of SpaceX or the other major launch providers that NASA and others typically use. But it’s one that the company believes will help take a bite out of the burgeoning small satellite market. By launching from a plane in the air, Virgin Orbit’s system doesn’t need as big a rocket, or as much fuel, which helps keep costs down. The company argues that this is a potentially more flexible system, since it makes satellite launches theoretically possible from anywhere a 747 can take off and land.

(Those reasons may be why Virgin Orbit has also inked a contract with the Department of Defense. Virgin Orbit wants to launch missions to Mars, too.)

But first Virgin Orbit must prove that the system works, and that the company can be profitable. Backers like Branson and Abu Dhabi’s sovereign wealth fund, Mubadala, have sustained it through development so far. The company is now seeking up to $200 million in new funding after spending hundreds of millions of dollars developing the airborne launch system it will test again today.

Hart stressed on the call that this is a test flight, and that the company will be “thrilled to get the data” that’s generated along the way so it can continue developing and refining the launch system. He also said the Virgin Orbit team is “mindful that there’s risk on whether we will get to the final orbit.”

But Hart said Virgin Orbit has been “working vigorously and looking at all the details and making sure that we have the best shot possible to get to orbit” considering there are real satellites on board this time. That work has included help from an investigation team made up of people from launch partner NASA, the Federal Aviation Administration, the Air Force, and industry professionals.

“We really immersed our engineering team with a fresh set of eyes to make sure that basically that we weren’t drinking our own bathwater,” Hart said.