When was the last time you felt the comforting touch of a loved one? Positive attitudes towards touch are linked with greater well-being and lower levels of loneliness, according to a new global study called The Touch Test, which took place mostly before the UK was in lockdown. Claudia Hammond looks at the results and asks how our need for touch has changed because of the pandemic.

Rob was 25 when he had a motorbike accident. Before that, his mother Sharen tells me, he was “the life and soul and something of a joker”. Two years on, as a result of his brain injury, he lives in residential care and Sharen says touching him has been “very, very important”.

“I was told from the start that I needed to touch him,” she says. “I used to be able to sit down with him and put on a film or some music and then I would stroke his face like I used to when he was little. I would try to move his hands, to massage his face and feet and legs, and to give him a kiss and a cuddle.”

Since March this year the pandemic has meant that Sharen has only been able to touch Rob properly three times, when she donned full PPE, cut his toenails, did his hair and gave him a cuddle. But now that there has been a case of Covid-19 in the home, she can’t even visit him.

“Touch does mean an awful lot. I can kiss and cuddle my daughter and if Rob was here I could do exactly the same for him. Not being able to do that to him is like a death. You can only see them through a phone or in photos. It’s really horrible,” she says.

For people in hospitals or care homes and their relatives, the deprivation of touch has hit hard.

But many of us are noticing human touch in a way that we didn’t before the pandemic.

It’s more than six months now since I’ve hugged my parents or my friends or anyone other than my husband. And I’m not alone, of course. Before the pandemic sometimes I thought it took too long when I was out with a group and every individual would hug every other individual goodbye. Now of course, I miss it. Blowing a kiss or waving goodbye is not the same.

In the new series, Anatomy of Touch on BBC Radio 4, I’ve been discussing alternatives to touch with my guests. Prof Merle Fairhurst from the Bundeswehr University in Munich has been experimenting with exercises where she gets people to imagine the last hug they had and then to wrap their arms around themselves in a self-hug which they then hold for two minutes.

In London, flatmates B and Z found their own lockdown solution. They were living together in a bubble, but missed their partners and other flatmates. So they instituted a six o’clock hug: at the end of every day they would hug each other for 25 seconds – long enough, they decided, to get the physiological and psychological benefits that touch can bring.

Another option is to try hard to put into words the message your touch would have conveyed. But only a few weeks ago it became clear to me how hard this is.

I went with my close friend to her father’s funeral. I was standing next to her when the hearse containing his coffin slowly drew up in front of us. Every instinct told me to hold her hand, but I knew I couldn’t. That one act would have conveyed far more than I could put into words. “I’m so sorry this happened; this must be so hard for you; he was such a friendly, generous person; I can’t imagine what this must be like for you; you will get through this; we’re all here for you.”

Even if I could have found the words fast enough, my speaking would have intruded on the silence. There are occasions where only touch will do and to be deprived of it is distinctly painful.

This is just one example. Everyone has their own stories of a pandemic without touch and they highlight what a crucial sense this is. Ophelia Deroy, a philosopher at Ludvig Maximillians University in Munich, believes touch is the most fundamental sense of all.

“It is a sense that we can never switch off. It seems to ground us in reality,” she says. “We can use touch to connect with other humans in a myriad of ways – we can be reassuring or draw someone’s attention to something, or surprise them, or express affection, friendliness or love.”

The importance of touch is underlined by the results of The Touch Test, an online study created by a team of psychologists led by Prof Michael Banissy at Goldsmiths University of London. The study was commissioned by Wellcome Collection in collaboration with the BBC.

All but one week of the study took place before lockdown in the UK and it’s clear that for most people touch was beneficial. 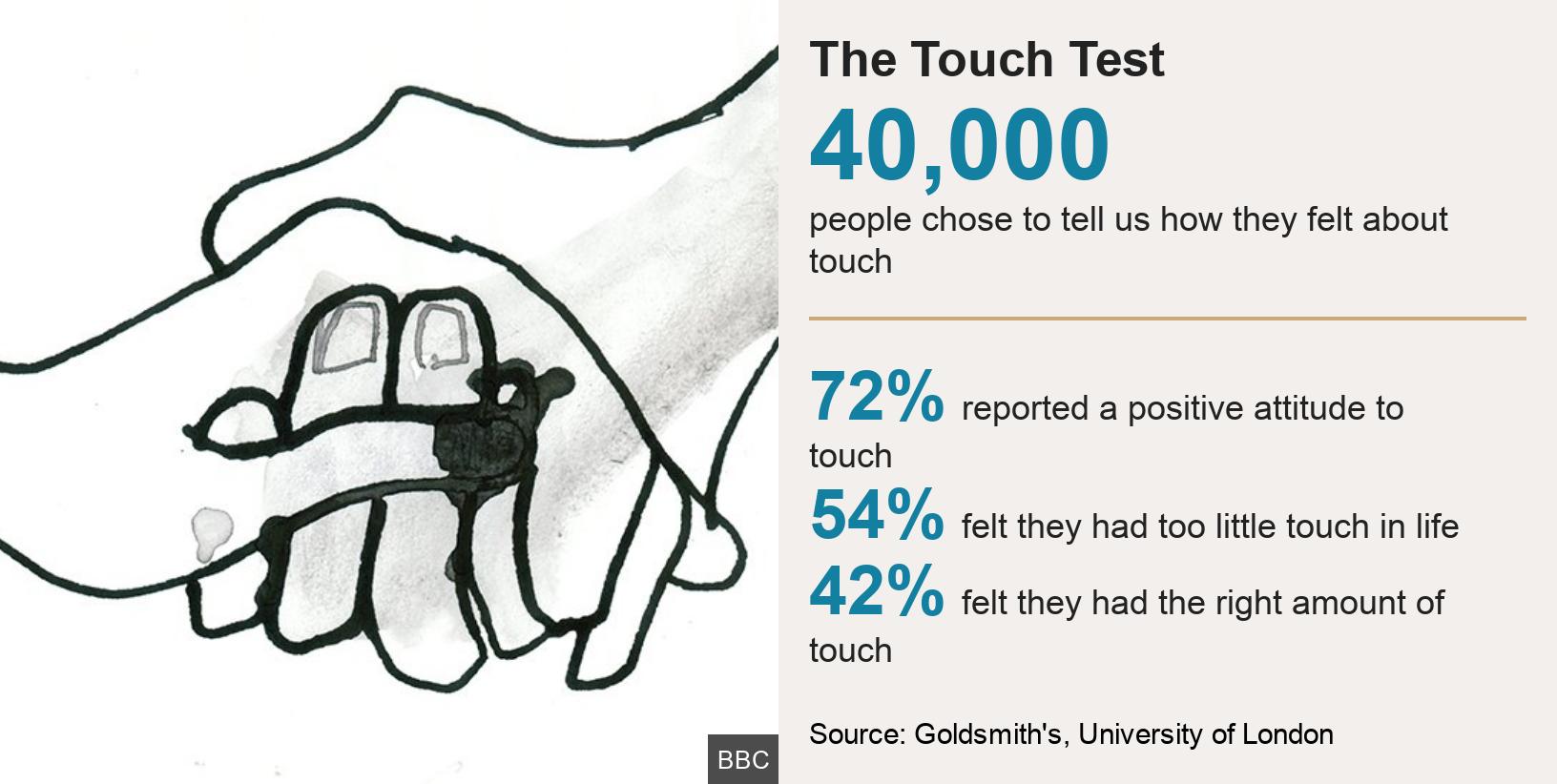 John Marriott is 80 years old and was brought up by his grandparents from the age of six weeks, after his mother left home. He spent his childhood deprived of touch.

“My grandparents loved me, but never once in all the time I knew them did they ever hug me,” he says. “Both of them were born in Victorian times. They were brought up with Victorian values and the parents didn’t touch their children and certainly didn’t hug them.

“When the mothers picked up the children from school they always gave their children a hug. Mine never did. I just thought there was something missing, I didn’t know what it was until I met my wife.”

Then everything changed and he realised how powerful touch could be. “I have never in all my life had such a wonderful feeling as when I first saw my two daughters and cuddled them,” he says. Since then he’s always been determined his children and grandchildren won’t miss out in the way that he did. He told me that whenever he touches his six grandchildren and his great-grandson all that warmth comes flooding back.

But while 72% of people who responded to the Touch Test felt positively about touch, 27% did not.

So it’s important to remember that not everyone likes touch and it doesn’t increase everyone’s level of well-being. The team analysed a host of variables including age and gender to see what makes the most difference to our attitudes towards touch. Two factors stand out. The first is personality. People who like touch tend to score higher on scales measuring extraversion, openness to new experiences and agreeableness. People who don’t like touch were more likely to find it difficult to form trusting relationships.

Not all touch is consensual of course. Dr Amy Kavanagh is a visually impaired activist and campaigner. Normally her commute takes her just over an hour. On a typical day four strangers will touch her without her consent.

“I might be dragged down a set of stairs or pulled on to a train or pushed into a seat,” she says. “The touches range from a light nudge or someone touching my arm to a full grab where people take hold of my shoulders or grab my white cane. Sometimes they leave marks, bruises and scratches.

“Deep down people mostly do want to be helpful. But it feels violating and invasive. It’s that assumption that they can touch me because I’m disabled.”

In addition to these people who are trying to help, but fail to ask before touching, Amy is regularly sexually assaulted by people pretending to help, who then refuse to let go or touch her in inappropriate places.

In the Touch Test 63% of people who responded said they did not like being touched by strangers. Others didn’t mind, which again shows how much personal preferences matter when it comes to touch. Younger people disliked touch from a stranger more than older people did.

When people were given a map of a body and asked where it was OK for a stranger to touch them, most people didn’t like them touching any part of the body apart from their hands.

Amy’s campaign to stop unwanted touch from strangers has a simple slogan: “Just ask, don’t grab.” She would also like people to say hello first, and to remember to say goodbye, so that she’s not left talking to herself.

The #metoo movement has brought unwanted touch to the fore, especially in the workplace. In the Touch Test we asked people to select the most appropriate way to say goodbye to your boss after an evening event. Shaking hands was the most popular response. When it was a colleague, people were divided. Men tended to prefer a handshake while women would prefer to hug a colleague if she was a woman and to pat a male colleague on the shoulder.

During the pandemic there are no office parties of course. But we are thinking about who we touch a lot more and perhaps it is becoming more acceptable to step away when someone comes too close. One day, when we can touch each other again, two things are clear – positive touch can be extremely powerful, but we should ask before we touch.

For Sharen, who still can’t touch her son Rob, her biggest hope is that she can visit him soon. “I hope this virus goes and the minute it does I’m going to be straight up there every moment I can. He’s going to get so many kisses and cuddles and so much hand-holding and massage that he’s not going to know what’s hit him!”

A staggering 55,000 people from around the world took part in the BBC’s Loneliness Experiment in 2018, making it the largest study of loneliness yet. Claudia Hammond spoke to three people about their experiences.